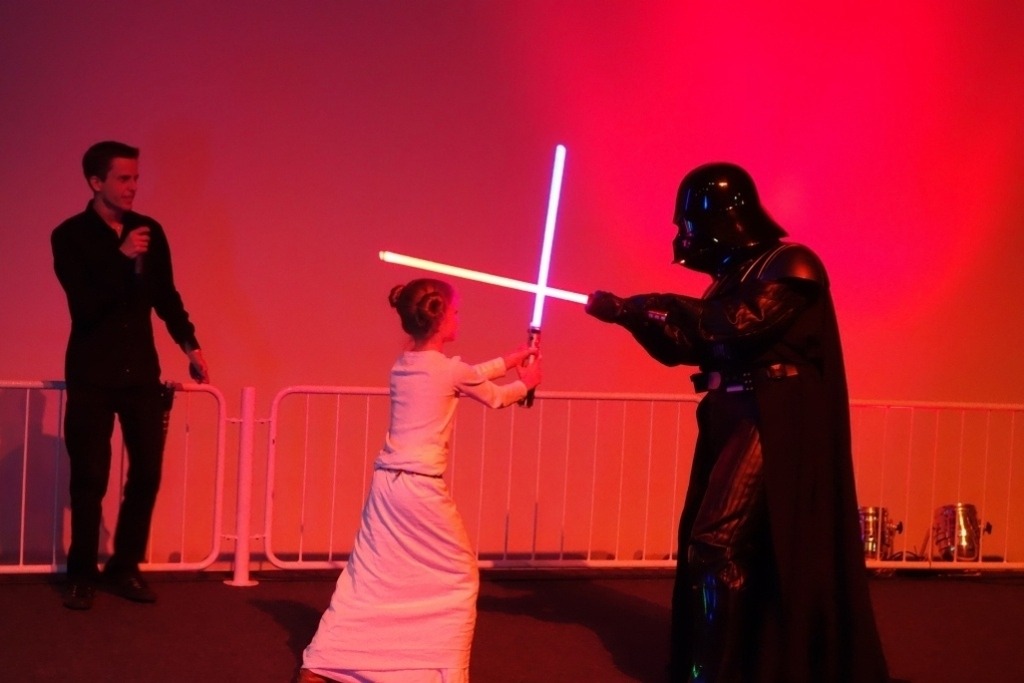 With the motto 'fiction meets reality' this year's event of Star Wars meets friends at the technical museum in Speyer took place once again and surely will be remembered.
At 28th and 29th September we conquered the museum with numerous Star Wars fans. Under the flag of the German Garrison the participants entertained the audience with their costumes and various exhibition and information booths. Moreover some of them were offering a photo point and they all took part in a great parade through the museum's halls. Naturally there were also lots of merchants and additionally a paper chase and a Klingon workshop were offered.

Of course we were part of the program as well with our current stage performance and illuminated the forum with our lightsabers.
With a perfect lightsaber feeling our blades clashed in fascinating duels, in which our heroes from the light side of the force again tried to defeat the Sith. Furthermore our costumes and the individually composed music improved the Star Wars atmosphere even more.

Despite all efforts Darth Vader prevailed, so we trained new Jedi with a reliable Clone Trooper at our lightsaber workshop at Saturday. In pairs the participants learned and practiced their first moves and strikes. Facing so many opponents Vader had no choice but fleeing and we drove him away with a combined force push.

Right before the workshop we were also able to give some impressions of our shows' development. In doing so we informed about the team's work, the concepts as well as the necessary technology on stage and beyond.

During our breaks we took the time to explore the museum with our friends and acquaintances. The impressive exhibits surely took care about the right atmosphere for this special event. Of course we also used our free time to chat with the visitors and meet some well-known faces.

We thank all assistants for their support and are happy to announce, that we will again be part of the Star Wars event at the museum of technology Speyer at 27th and 28th September 2014!
Wir danken allen unseren Helfern für die Unterstützung und freuen uns schon auf das nächste Star Wars Event 2014 im Technikmuseum Speyer!