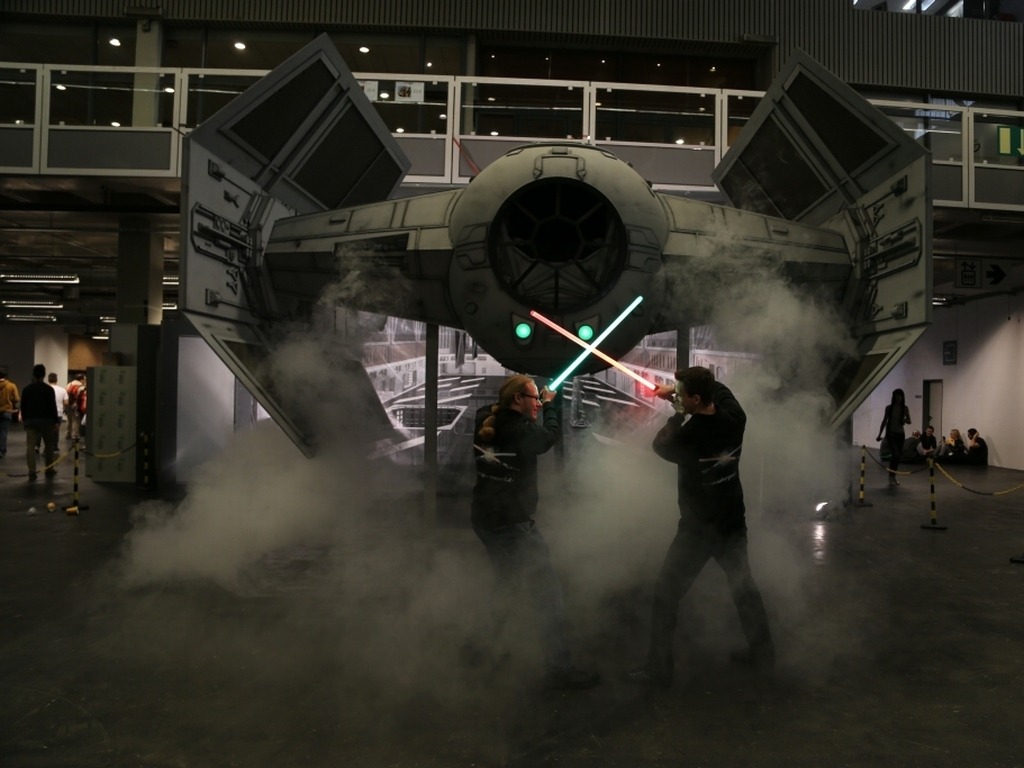 Tim, Hendrik and Dino already met on Thursday evening, so they could depart to the F.A.C.T.S. in Ghent, Belgium, Friday at 10 a.m. and did not need to hurry. At 4 p.m. they arrived at a good friend's house, who was so kind to offer us quarters for the weekend. Only a short time later Markus and Stefan arrived.

The next morning we got up early to be at the convention at 10 a.m. However - for we were not taking part in this event with our show or booth - we spent the morning with a long breakfast and arrived at the F.A.C.T.S. at 11.30 a.m. Despite our preordered tickets we needed to line up with all the other visitors.

When we finally entered the halls, all our frustration was gone. Next to various costumes from comic, fantasy and sci-fi there were lots of interesting booths and dioramas to admire. Moreover one could purchase autographs and pictures with numerous actors, like Manu Bennett for example, of whom Dino could not wait to get a picture with. Meanwhile the rest of our group walked over to the merchants and exhibitors. There was everything a fan would love to see: seldom lightsabers, unique life size replicas (among others of the Kamino Saberdart) and a whole lot more.

Of course we also visited our friends from Project X1 and their Vader's Tie Fighter at the hall's entrance. There we spontaneously showed some of our choreographies and soon had our own crowd of audience. Furthermore we met Erv' Plecter from Plecter Labs at the Rebel Legion booth in the second hall. We presented him our sound system proudly and in return he showed us his replicas of the alien motion tracker and the light whip, which we tried out with a lot of fun.

Besides many interesting chats we used the time to take pictures in front of the dioramas, which have been built by fans for fans. After two exciting days the event ended and before we started our way home tired and exhausted, we finished the weekend with a comfortable dinner.