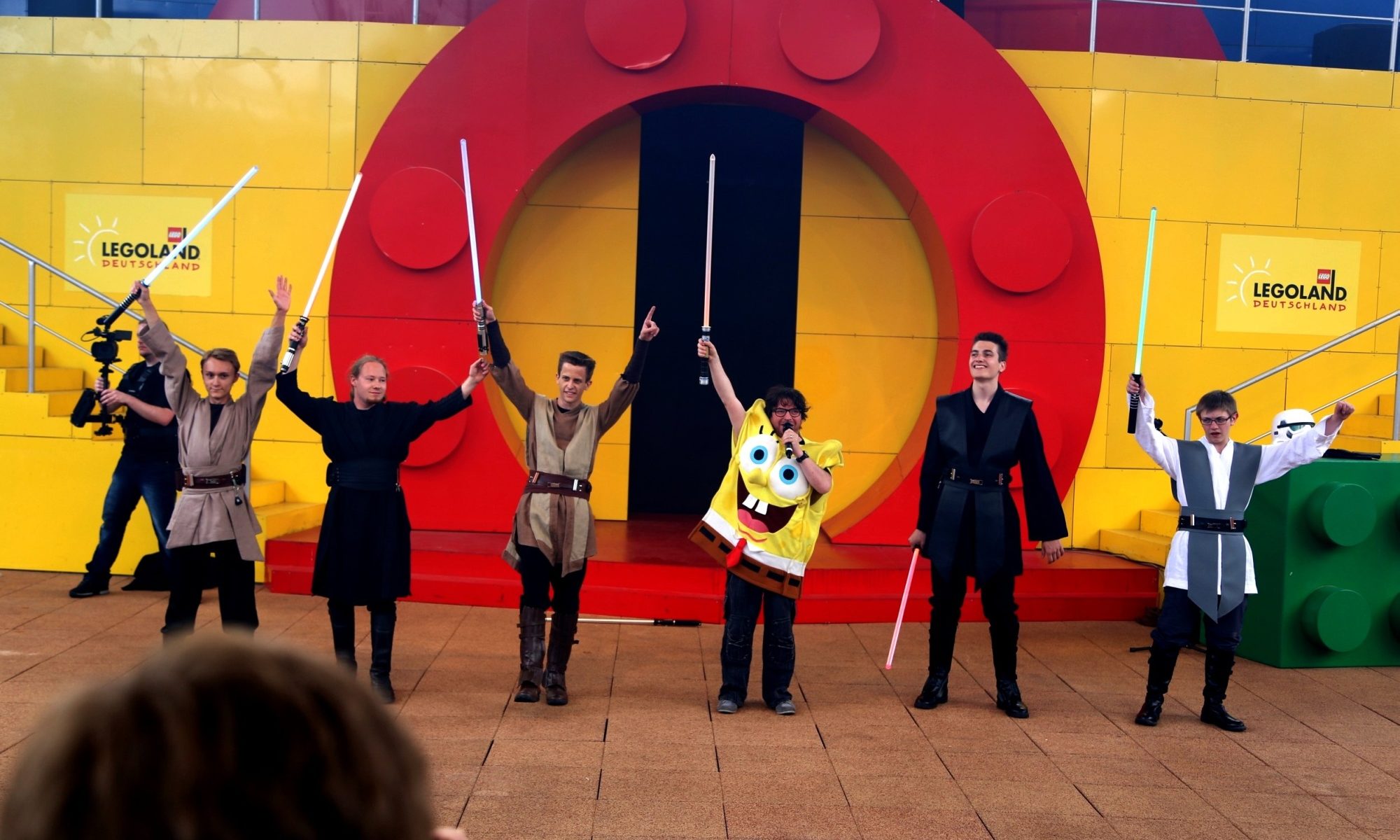 Just like last year we arrived after a long ride at the Legoland Günzburg. So we had the opportunity to unload everything and to build up our booth in a good time before we went to our accommodation.
The next day finally everybody was ready to make the next days and our fith year at the Legoland Germany unforgettable.

Of course we wanted everything to work fine. At 8.00 a.m. we went to the park and practised our new program for the last time and checked our improved wireless sound system, which would broadcast the lightsaber sounds with the arena's hi-fi system even better than last year.

Right after this and well prepared we went back to our booth, where we had some nice talks with our friends and menbers of the German Garrison who build up their booth at the Mindstorms Center, too. But we did not have much time for this.
The park opened punctually at 10 a.m. and soon we had a lot to do when the first visitors appeared.

Later we had to deal with the most thrilling part of the day. With Hannes, Fabi and Hendrik we had three Jedi and Sith who fought in our new program for their first time. Before we started, the entertainer Hennes Bender got the audience into a great mood. After we finished the first show, still slightly nervous, we were confident to perform the other ones in a great way as well.

We spend the rest of the day with traveling between the shows and our booth. When the park had closed, we fell, a little bit exhausted but happy to got the first day done, in our beds.

After a refreshing night and a restorative breakfast we started into the friday. Already in the morning the weather was quite rainy but in any way it did not prevent the crowds of visitors to attend the park. Again we had to answer a bunch of questions and had a lot of interesting conversations.

Despite the good conditions not everything proceeded as we wanted it to. Alex, who fights as Darth Vader in a relentless hunt against our brave Jedi on stage, had to leave us in the early morning. Because of this the show got an alternative ending and an improved freestye part in which everyone performed his best spins, twirls and throws.

With one team member less we were also much more reliant on the help of our assistants. At this point, we want to thank Günther, Lara, Heidi, Tom and Florian, who took responsibly care of our booth during the shows.
In addition to that we also want to thank Bastian Bechtel from Corpse Tree Digital Designs, who stayed three days at our side to catch all the impressions of this event professionally.

Together, we finally finished the Friday. When the park slowly closed, we cleaned up our booth and went to our accommodation.
The first two days passed by much too fast and we tried to get some sleep for the next half of the event.