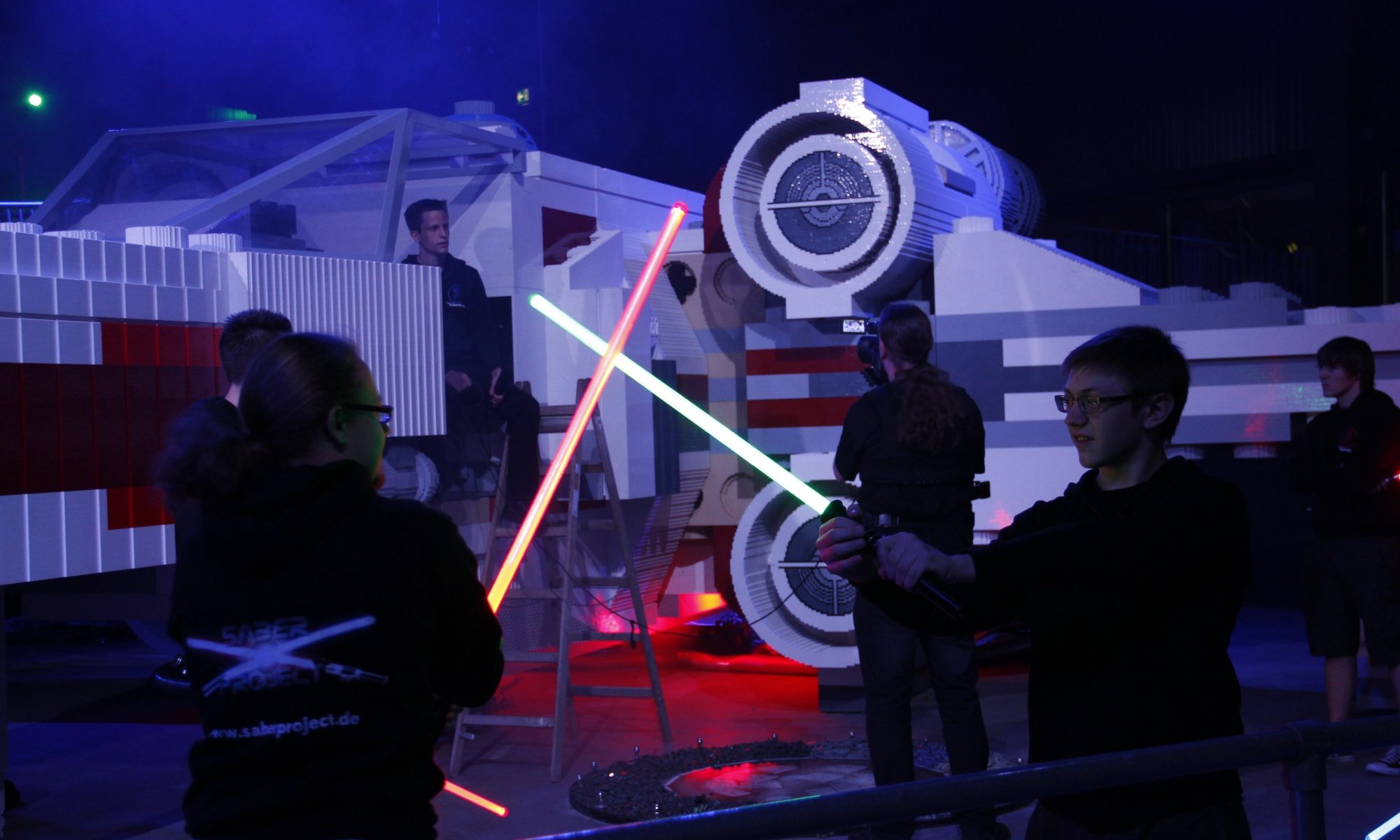 After we had a very short night we arrived at Legoland two hours before the park opened on Saturday and instead of going to the Lego Arena to work on problems in the choreographies, we went to see the huge Lego X-Wing that was built up in the Hero-Factory. We also shot some videos with Bastian at different locations in the park.

When the park opened we were at our booth to help fans that were interested in lightsabers. That day the R2-Builders also had a booth including several R2-droids.

At 12:30PM we found ourselves on stage again, without Vader like the day before. But we had an improving and new conceived freestyle-program which finished off the new show. After a conclusion by Hennes Bender we changed back into our team shirts and went to go get something to eat for lunch, after that it was time to stand at the booth.

Afterwards it was our turn again and 30 minutes later we were headed back to our booth being completely done. The last hour before closure of the Mindstorms-Center was over in the blink of an eye because of the big rush after the advertisement by Hennes Bender. When the park got emptier we slowly left as well but the day wasn't over yet. There still was the traditional dinner with the GG.

After refreshing ourselves we went again to the restaurant “zur Linde”, just as last year. Markus Rau, the commanding officer of the German Garrison, thanked all participants and the Legoland which was represented by Michael Schwägerl who also received thanks from us for giving us the opportunity to take part in our 5th Legoland-Event. To everyone’s surprise (even the rest Team didn't know of anything) Tim, Daniel Dick and Markus Rau introduced a German Garrison/Saberproject friendship-badge.

Lastly after good food and a not so good football-match (Germany vs. Ghana, 2:2) we went downstairs with some of the members of the GG to go bowling. We enjoyed the rest of the evening among friends.

The last day was approaching and we still tried to look fresh despite the struggles of the last few days. Since there was nothing left to discuss or to build up at the booth we entered the park only 1 hour before opening, got ourselves some coffee and waited for visitors. Bastian had to leave early because of his very long journey home. And yet again the park was full and so was our booth.

At 12:30 pm our second last show for this year in Legoland started. A show that we'll never forget. For the first time ever we forgot a complete choreographie. Fortunately the persons involved in this faux pas dubbed the mistake so only few people in the audience saw it. After a very delicious lunch and some work at our booth another parade took place in which once again SP was involved. While Hennes Bender performed his program on the stage we waited impatiently for our last show which turned out to be the best of the whole weekend.

Back at our booth we gave some more information about lightsabers and our show to the visitors until we started dismantling our booth right after the park got closed. After that we started loading everything into our van.

Around 9:30 pm it was time to say goodbye to the Legoland for the 5th time. Now we look back to an amazing event which was fun not for us only.

Thank you for the awesome time at the Star Wars event in Legoland Germany 2014!