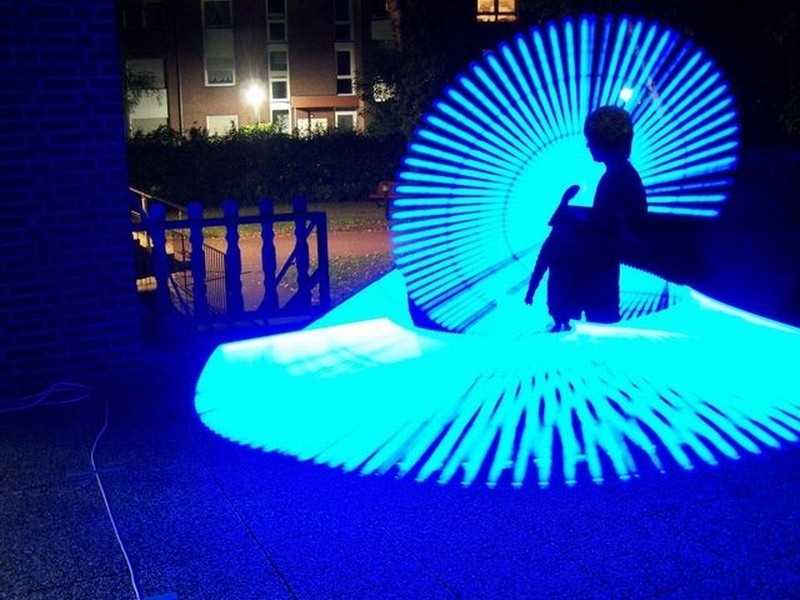 At 10:30 am we (Tim, Lukas and Andre) arrived at "Naturfreundehaus" in Gelsenkirchen, where the Rebellenstützpunkt held their year meeting. After building up our Stand, the house slowly filled. From diverse figures to a huge diorama everything was exhibited and love to detail was highly visible.

Many visitors were interested in our exhibits, too. Very fast the first conversations and discussions were started and also about our lightsabers a lot was spoken. Till the afternoon all "rebels" arrived and the mood was getting better and better. To make the mood even better, cake and coffee was offered, while these vanished figures and collectibles were swapped or sold. We offered four lightsabers, and three of them found a new owner!
In the meantime we leaned to know many people and it was still discussed and described. The weather could not be better, so we were able to revise our choreographies, which we wanted to show in the twilight.
Since Lukas unfortunately had to leave, we could not show it as planned.

At 17:45 Eddy (Swaktor) arrived, who was not able to come in the morning. At 19:30 it was time for our presentation, for that we hat to change our clothes. After the speakers were laid outside and the music started, everything got started.
First Tim faced Andre. After a hard fight, when Andre lay on the floor beaten, Eddy saved him in the last second. But he didn't have a chance against Tim and after a intensive, fast fight he was defeated. Andre had recovered and took a doublesaber. Against the restrongened Andre, Tim had no chance and became a victim of his blade. After this performance we were not really happy since we made some mistakes. Because the audience wanted to see it again, we repeated our program after a small pause.

The second performance was way better despite the fact that our forces weakened. But finally we had fun and the "rebels" enjoyed our little show.
Then the dinner followed to strengthen for the rest of the evening. After dinner we took our tools to fix a defect saber, which one of the visitors brought with him. So all interested could watch how to do such a fixing and what to look for.

When we were done all made themselves comfortable in the main hall and watched two videos where we had much fun and was laughed a lot. The rest of the evening we spent our time with discussions and smaller saber fights.
The whole meeting was organised perfectly, many things were worthy to see, many conversations were held, it was good mood and the people were just chilled. So we were finally were at home at 3:30 am.
Den Rest des Abends verbrachten wir mit Fachsimpeleien, Diskussionen und natürlich auch kleineren Schwertkämpfen.

Here we want to thank for the invitation, the positive statements and that we were accommodated so kindly.