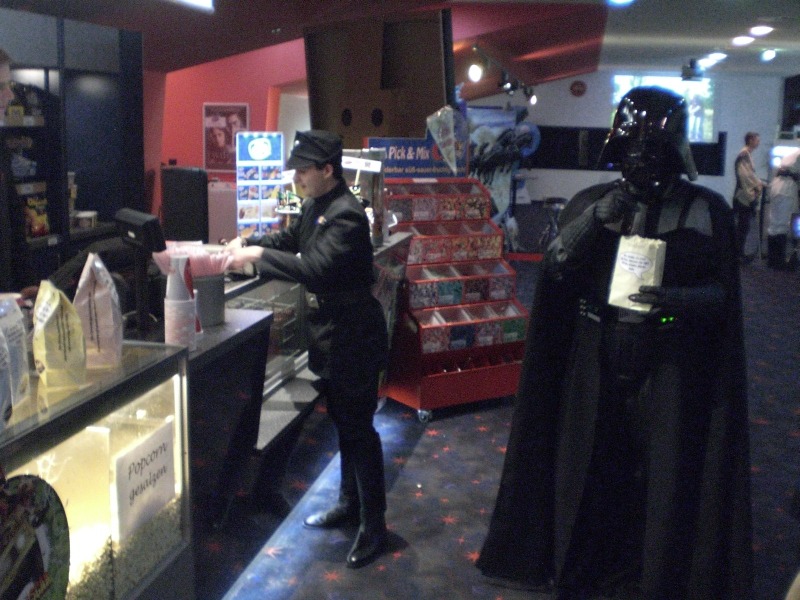 Due to the fact that we worked on Markus lightsaber till 3:30 am, we got up at 11:00 am, at 1:00 pm we wanted to be at the cinema. After everybody had a breakfast, except for Markus who wanted to see his saber complete, we pulled out and arrived some minutes too late, because of Markus dalliance.

As soon as we arrived at the cinema, we set up our stand. After a short briefing we filled our stand and were waiting for visitors. As on the day before, the crush was relatively low. But we were supported again by an imperial officer and members of "Order of the Force" and lichtgeschwindigkeit.de looked in, too.

Altogether we had a calm morning, which we used with practising, designing new choreographies and some freestyle fights.Jan, who tried Alex Darth Vader costume, had his fun with condoms to everybodys amusement.

About afternoon the crush was a little bit bigger. We explained, discussed and showed. But we didn't make a live-performance like we did before every movies beginning in CinemaxX Mühlheim, because the interest wasn't too high. So we limited ourselfs to show parts of our choreographies.

As the last movies of the day had started, we made some team pictures and took down our stand, so that we packed everything in our cars at 0:30 am and could make our way home.

Altogether the activity at the CinemaxX was a nice, calm end of the year. Compared to the start of Clone Wars in CinemaxX Mühlheim the crush was lower, which was likely because December 29th and 30th were normal work days and most of the potential visitors were at work.