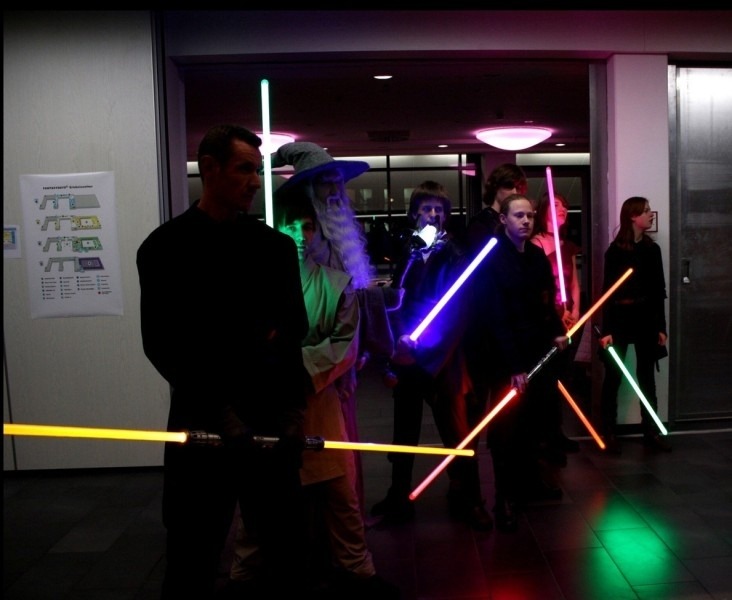 For us the weekend already started on Thursday evening. While Andre began to build up the stand at noon, Tim, Eddy, Jan and Jana did not arrive until 5 o'clock pm. Soon all tables were covered with sabers and all sorts of other things and we started a bit of training in the same room - but because everything worked smoothly, we decided to drive to our quarters at a bout 11 o'clock pm.

For a few things had to be prepared for the next morning, no one had much of a restorative sleep; after about an hour's drive we were back at 8 o'clock pm on Friday morning at the Burg-Wächter Castello. There we had a few talks with the helper's crew, trained our choreographies, made a lot of jokes and laughed of course.

Meanwhile our neighbours, the crew of the movie "Cool-Age Revelations", had built up their stand. The rest of the morning was composed of waiting. The entrance was set for 12 o'clock however the fire department had not given its blessing to all of the units, so everything was a bit delayed. At about 1:15 pm the first visitors were allowed to enter the area. In the meantime Jan took lots of pictures with his new SLR-camera. You can watch some of the results here.

By now the first visitors had come to our stand. Short after that a part of us went to find their way to the food court to fill some hungry stomachs, while the rest of us talked to the visitors and sold the first lots.

For the engineering team was not ready with the stage yet, our first workshop unfortunately had to be cancelled. The opening, too, had to be moved to the small stage.

Finally our last team members, Markus and Saskia had arrived at the Burg-Wächter Castello and we had to hurry down to the changing rooms to change into Jedi and Sith, because it was nearly time for the opening show. We waited at the small stage for our entry, then Tim informed about our shows and workshops shortly and we showed some of our spins and moves.

Afterwards we were asked to get on the stage again, this time with the storm troopers of the 501st. We walked around each other spinning and took a position at one end of the stage while other show acts were asked to get onto the stage. Even though not everything happened as it was planned and the greatest part of the program and therewith all shows on the big stage had to be cancelled it was a nice opening and a successful evening and all attendees got a lot of applause.

Den Rest des Abends verbrachten wir am Stand und gegen 11 Uhr begaben wir uns zur großen Bühne, um ein wenig zu trainieren. Das Technikteam war derweil mit Lichttests beschäftigt, und als wir gegen 00.30 Uhr das Gebäude verließen sah es Bühnentechnisch immer noch nicht sehr vielversprechend aus.
We spent the rest of the evening at our stand and at about 11 o'clock pm we got to the big stage to train our choreographies. Meanwhile the engineering team was occupied with testing the lights and the spots and when we departed from the area at half past midnight, the stage still did not look very convincing at all. The next morning we got to know that a new engineering team took over the whole thing and the stage was ready for Saturday morning fortunately. This way we spent some time training until we finally drove home, tired but happy.