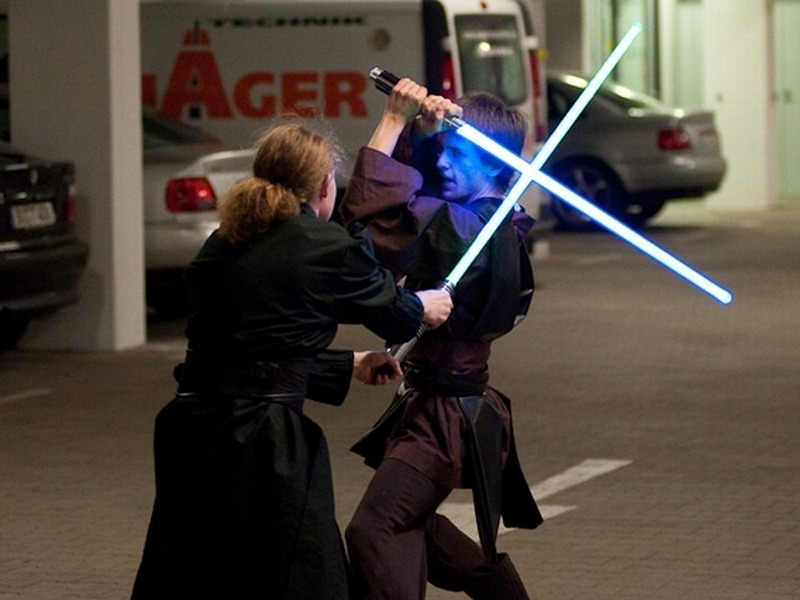 After about three and a half hours of sleep we got up at 5:45 am on Saturday morning to leave the house at half past seven and make our way to the Burg-Wächter Castello. On our way we had to stop at a gas station, where Tim was addressed with "Hey, you, aren't you one of those lightsaber fighters?"

Arriving at the Burg-Wächter Castello we learned that the engineering team had been exchanged over night and all day's shows should take place as planned. Our first show was scheduled for 12:30 am. But before this, we had a lot of things to do. The day's first visitors arrived little by little and we got ready to welcome them. Questions were asked and answered, sabers were tested, lots were sold and the shop as well could popularize a lot of its program.

Short after noon we packed our stuff and went down to our changing rooms to get changed into Jedi and Sith for our show. After a few short minutes behind the stage our time had come.

Rene, one of our helpers, supported the team with light and sound controls in cooperation with the engineering team, which has been a well organized team the whole weekend. Without this help our team would have had problems, because this time all members of our team were on stage and nobody could take the engineering.

For the first time we even had a violet blade on stage at a show, which was handled elegantly by Shane in her fight against Scoulcher. After this worthy first fight, Swaktor got onto the stage. These two as well presented their sabers in a faultless exchange of strikes. Afterwards Karsil, Anatim and DarshaJela, too, participated in the events. While Darsha challenged Scoulcher, Karsil and Anatim dueled simultaneously. Anatim and DarshaJela triumphed finally over their opponents; the dark side appeared to be defeated. But before this, they had to face their last enemy, Bertuzzi. He demanded all of their abilities and hit Anatim such a mighty stroke that he fell to the ground totally numb.

But what would have been a good show without a worthy blooper: After a few strokes against his enemy one of the blades of Bertuzzi's saber loosened, so he could face DarshaJela only with one left blade now. Nevertheless Bertuzzi swapped his own damaged saber with the one from his finally defeated enemy. Then he turned to face his last fight against the recovered Anatim.

The show has been a great success for us. The long trained program had worked very well, even though Markus' blooper was a bit irritating. All in all we got a good reaction and reached our self-set ambition. We got changed again and went back to our stand, which was even more visited than before by people, who wanted to see some lightsabers or ask some questions.

Even a reporter from 1Live, a german radio station, who wanted to make a report on the fantasydays, met us and asked for a little interview, which you can hear right HERE.

Finally the time for our first lightsaber-fight-workshop had come. All in all 19 participants equipped with lightsabers made their way to a free room under the command of Tim and Jana. Starting with holding the hilt in the right position, getting over to the basic spin and first easy strikes and ending up with a sequence of strikes and the feet's positions Jana and Tim taught our "young apprentices" everything for following private study. We had very much good comment on that one and everyone had a lot of fun.

With the coming evening, our room became more quite and empty; because the Ringstars had their show now. Most members of the team watched it, too, at least in parts and were thrilled. But two stubborn visitors, Tim and Sebastian, stayed with us.

For the was little else to do the bigger part of the team made their way to the great stage, where the German metal band Metalforce would have the premiere of their new album. But instead of even a half filled hall the five musicians only had about 50 spectators being gathered in front of the stage. However this did not break the good mood, far from it: the band gave a great concert and the atmosphere was fantastic. According to this we made our way to our room very euphoric one and a half hours later to get our things packed and leave the Burg-Wächter Castello short after one o'clock in the morning.