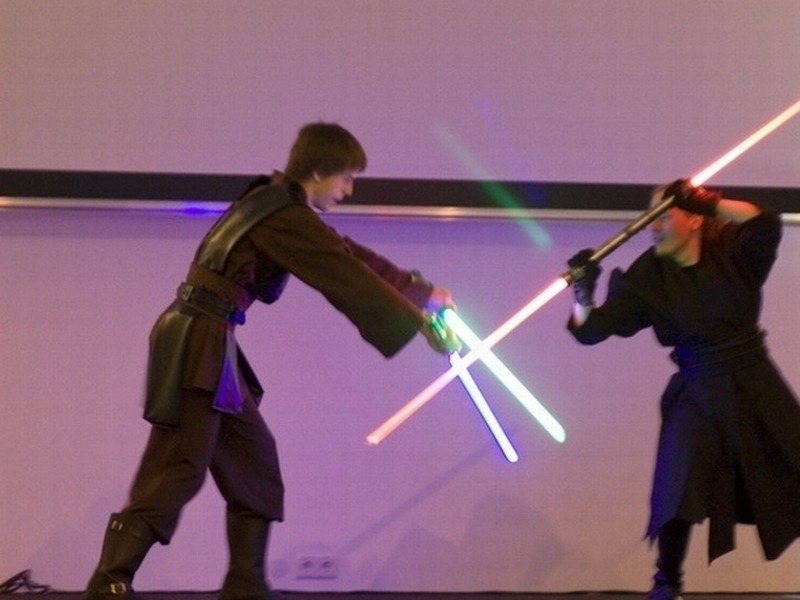 After another night with no more than a four hour's sleep we started getting up at about five o'clock at Sunday morning, for our first workshop would take place at 9:30 am. Tired and sleepy we finally made our way to the Burg-Wächter Castello one more time.

When we arrived at half past eight, there were no more people than a few guys from the staff - so we used the spare time to prepare everything for the first visitors and again train a bit.

By and by people arrived and we had a lot to do at the stand and even more at our two workshops. This way we spent plenty of time talking to visitors, telling them about us and selling lots, while Tim and Jana showed the lightsaber-newbies how to handle and fight with the weapon.

When the first run was over, parts of us found the time to go for a walk together. In doing so, Jana got herself a henna-tattoo of our SP-logo from one of the numerous stands, which was admired quite often.

For our next show should take place at three o'clock pm, we packed our stuff at half past two and went down to the changing rooms to get changed into Jedi and Sith again.

After a short wait behind the stage we took our turn. We really had a lot of fun, because unlike the first show the other day we did not have any bloopers - and we got a lot of applause.

While many team members had changed back already to answer the questions of impressed spectators and even fans at our stand, Markus, Tim and Saskia - still in their Jedi and Sith outfits - went to the small stage, for they should represent the team at the closing show later on.

After a few minutes nothing had happened and because of the show not being able to be started for quite another while, Markus and Tim decided to enter the stage for a spontaneous, totally improvised show. It did not take long until plenty spectators had gathered around the small stage and so, after the great show of Markus and Tim, the closing show finally could begin.

Following lots of other different workshops and acts, we were requested to enter the stage again and many people wished for a bonus show. In the end we did not stop and showed our choreographies again partly with, partly without our costumes and without a certain program and improvised even more spins and throws to animating music.

When the closing show ended and the great number of visitors went their way, we - really being tired out - decided to dismantle the stand to get ourselves out of the building and into our warm and cozy homes.

For we were all very tired and wiped out, it took some time to clean everything up and we were happy to finally leave the Burg-Wächter Castello after a great, but exhausting weekend at about 11 o'clock pm.

On the other hand we are happy about the great success of our shows and the workshops, the interest in our projects and the great audience we had there in Düsseldorf and ultimately like to thank Etienne, Nadine, Rene, Jarek and Thorsten, who were at our side as helpers at the stand and behind the camera as well the whole weekend; without their help the smooth flow of our program would not have been possible.

In this spirit special thanks to Marc and Beate as well - for the invitation and the whole organization at the Fantasydays. We hope that the visitors had a lot of fun and we were able to enthuse some more people for lightsabers.