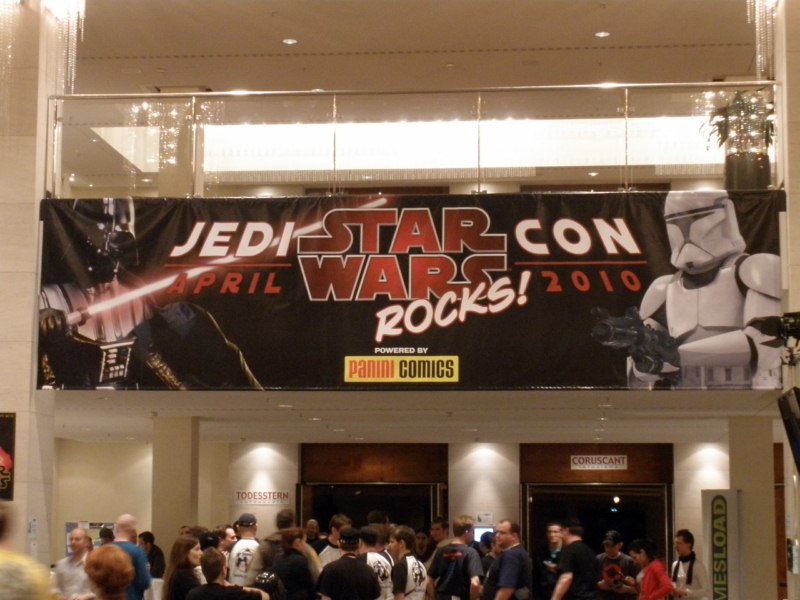 Our day already started a few hours ahead of the official opening at noon. At ten o'clock we arrived in our room "Alderaan", where Andre already had built up our stand on his own the day before. We used the still abandoned fan-rooms to have a little relaxed training and to take some team- and single-pictures.

But not only the team-members got in front of the lense: Our brand new stand with the banner, mirror discs with the SP-logo and coloured lights was photographed very much as well and we could not stop thanking Andre for this fantastic work.

Even if we had seen it at Friday, we were curious how the new design would work out on the visitors. When every saber had been rightly placed, we looked at the main impression one last time before great entrance began.

The visitors seemed to be as pleased with the new design of our stand as we were, for only a few minutes after the convention had opened, a crowd of people compassed our stand and we were in the middle of con life. We answered the questions, presented our lightsabers and also sold some products of our shop, which offered Covertec-belt-clips, D-ring-clips and SP-blades. We also embraced sabers for conversion.

By and by we split up into small groups to explore the rest of convention. Along the way we met Jake Lloyd (Anakin Skywalker from Episode I), who seemed to be present physically only. To us he appeared awed of everything around him although he showed his dry sense of humour.

After we saw all the stands of other fan groups, the huge assortment of products of the merchants and the guest stars, we returned to our own stand to support our mates. This had been indeed necessary for there still were many people gathering around our place. Meanwhile we met some well-known faces we had formerly met at other events or from our chat. We interchanged news and presented our latest sabers which impressed especially the younger visitors.

When afternoon moved closer we got quite hungry. In small groups we went to the airport nearby to get something to eat - due to the high prices we didn't want to buy anything at the con itself. After our meal and the return, the run on our stand, that decreased noticeable during midday, was frequented well again.

Nevertheless we still had the time for a few little lightsaberfights in the atrium of the hotel.

The afternoon spinned away and we had almost been eased when the fanrooms closed at 7:30 PM. We all met in front of the "Coruscant" area to attend the Opening-Ceremony. At 8 PM we sat on our chairs and just enjoyed the show which didn't convince us though.

The guest-panel with Steve Sansweet which was presented in connection with the show was more interesting for the most visitors than the opening-show itself. He told us about the latest developments of the Lucasfilm-activities and that there would be a sequel to the game "The Force Unleashed". The trailer, shown in the course of this panel, made sure the variety of his entry and whet the appetite for cinema or playing this game.

After all we left the Maritim-Hotel around midnight to drive home and recover from the hard day. After we practiced our choreographies and the course of actions of our own presentation fort he next day, we went to bed around 2 AM.