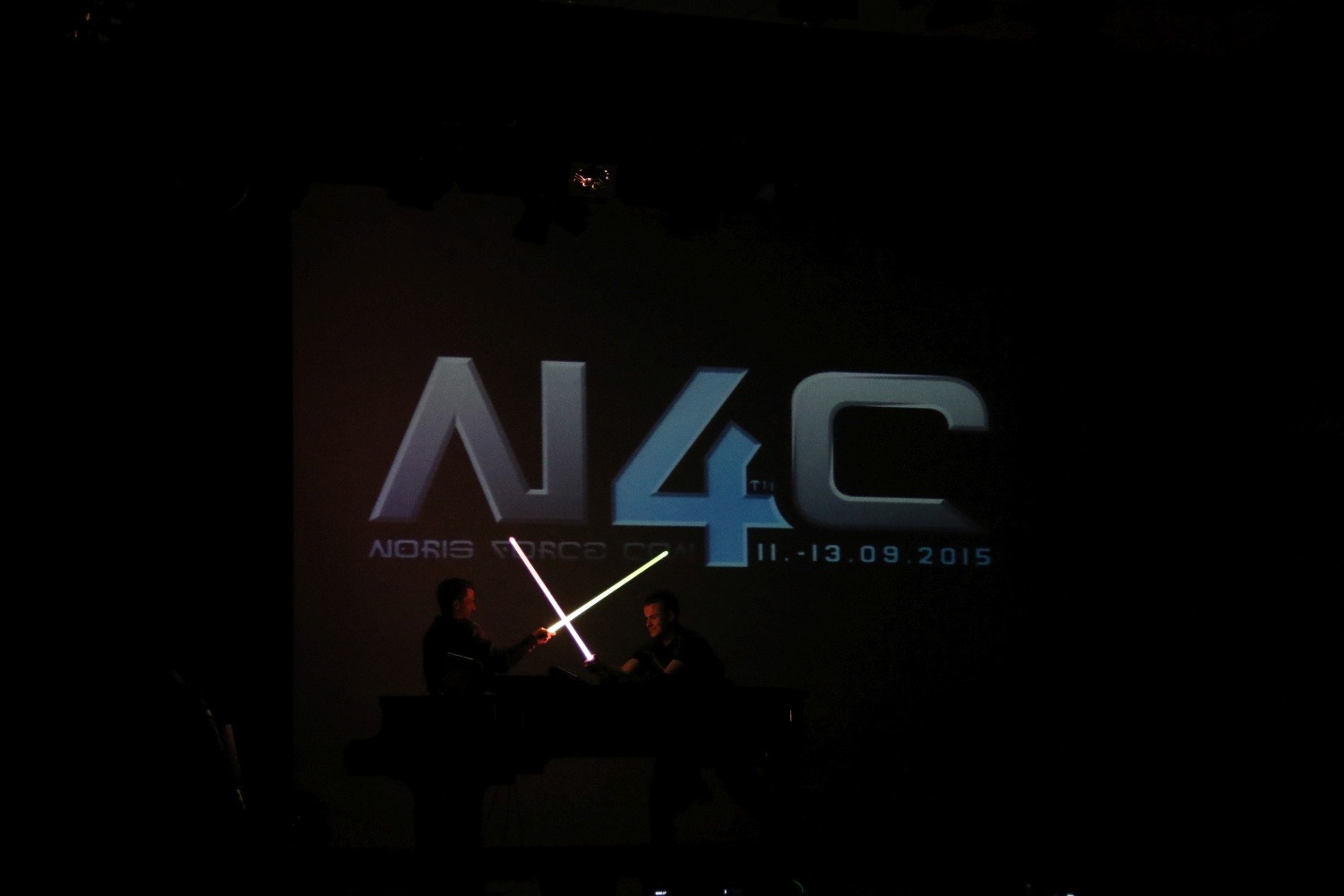 THE Star Wars Party in Nuremberg

Back in 2011 when the last Noris Force Con took place in Nuremberg we were tied up with our Workshop tour in cooperation with Hasbro. We had to wait for four years until we got the opportunity again to be part of this great convention at the beginning of September. This time we took our chance.

We already met on Thursday in Nuremburg and began to build up our booth. The location itself was spacious but the passageways were very tight so that we just built up the back row of our booth. As a result we detected a completely new booth concept. We didn’t have to stand behind a row of tables but could make direct contact with lightsaber enthusiasts and fans. After a short construction time we drove to a sports hall which was our overnight stay. We knew that sleep would become a precious commodity this weekend.

At 9am we arrived at the area, equipped our booth with lightsabers and went around greeting other fan groups and organizers. After that we put on our costumes to present lightsaber combats at the opening ceremony and to refer to our show.

Tim accepted to do a large part of the moderation so that we saw him especially on stage to announce guests like Dave Prowse, Timothy Zahn and Jeremy Bulloch. At the booth the others talked with lightsaber enthusiasts, informed them and evaluated new ideas. In the meantime we had the opportunity to admire the other booths and replicas, including detailed Lego models from „Imperium der Steine“ as well as authentic and high quality costumes of the group „Pa-Vis meets Mara“. Furthermore we pressed our luck at the tombola. The proceeds were donated to charity purposes.

Between lots of impressions of the first day we performed our program in the open air in front of the TIE Advanced from Project X1 and made a workshop for those who wanted to learn how to deal with a lightsaber. The day passed by in a flash and we returned to our accommodation where we immediately fell asleep.

On Saturday, the main day of the Noris Force Con, most of us visited the panel of Dave Prowse and listened to the actor of Darth Vader. Previously a Lego designer talked about his working life. With lots of impressions we kept an eye on our booth or took pictures with many costumed people in the afternoon. With darkness falling we put on our costumes and performed our show again. Directly after the visitors gathered at the main hall to listen to a fantastic film music concert of the town chapel Neunburg. After that we went to the After-Show-Party. But what happens at Noris Force Con stays at Noris Force Con. Therefore we do not want to report on (half-)naked men and crazy women, but leave it as a good evening (Get well soon, Eisi!).

Due to lack of sleep the mood was subdued on Sunday. We performed our last show bravely at this mid-morning, wandered through the passageways and posed with other costumed people for photos. Tim announced the last guest and kept company with us at the booth. Far too quickly the last day passed by and while the visitors attended to the closing ceremony we disassembled our booth with the firm intention not to start our way home at last which was normality on other events.