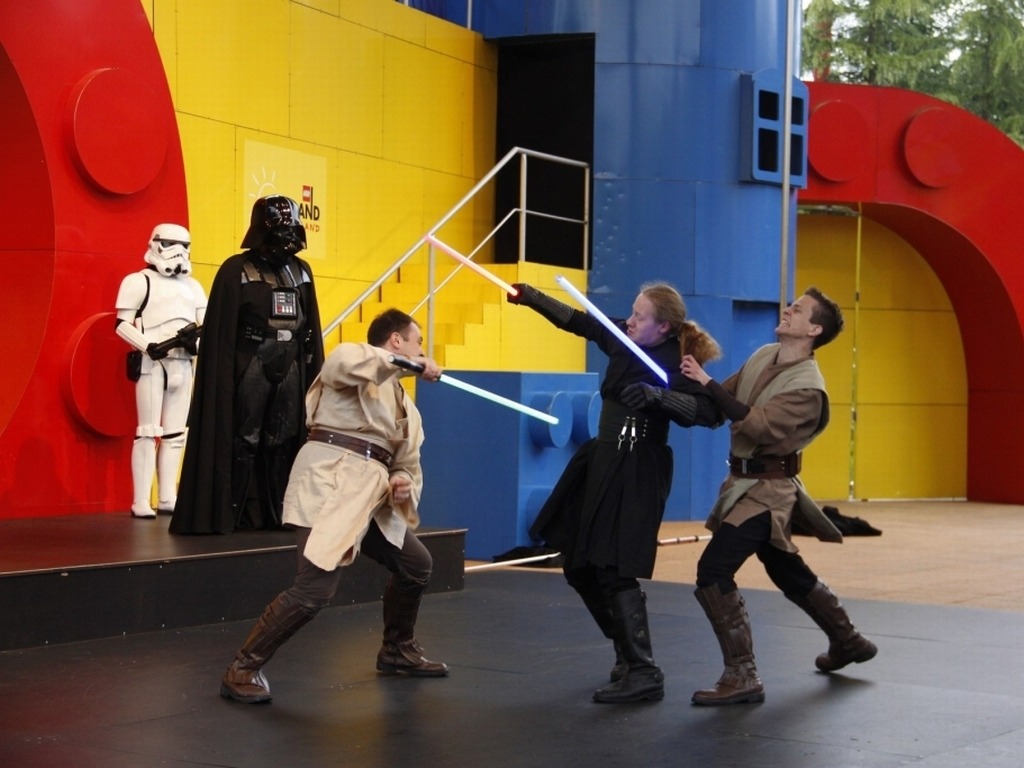 After the rest of our assistants had arrived Friday night, we could finally start the next two days. For the park would open at 10 a.m. as usual and we arrived quite early, we had some time left for breakfast, before we made our way back to the Mindstorm Center, where the R2 Builders were already about to build up their droids.

When everything was functional and R2 units began exploring the room, the first visitors dropped by. Despite the unrelenting rain the crowd increased and we had lot to do with answering all kinds of questions around lightsabers, giving useful tips and getting to know some new faces.

This way the morning passed and at 11.30 a.m. we went to the changing rooms to get dressed for the day's first show, while our assistants took over our booth. When the dancing formation of 'Tanztreu' finished their performance, we entered the stage a lot less exhilarated, but still a little nervous. Although it was really cold and a bit slippery as well, we fought through our choreographies. The wireless sound system worked perfectly fine and arranged the right atmosphere.
Das Saberproject Surround System in unseren Schwertern funktionierte einwandfrei und sorgte für eine stimmige Soundkulisse.

After our successful show, Ferenc Husta, the former bass from the german a cappella band Wise Guys, was awaiting us. He had lent his voice to the narrator of our show's intro as well as Darth Vader himself to get the audience into the right mood. After a lunch with Ferenc and his family we already had to head back to the arena to perform our second show that day.

After that we finally could get rid of our wet costumes and recover from the cold at our booth, where we spent the rest of the afternoon, until the park closed. But instead of driving home to our quarters, we met with the members of the German Garrison at a nearby inn to chat and eat with the others.

At Sunday we got up very exhausted, but nevertheless in a good mood. The rain had stopped and we were confident, when we met at our booth after the breakfast. Before the park opened we had enough time to take some pictures and check the booth for one last time. When the park opened its gates, some of us had time to stroll through the park and even try out some of the new attractions, until it was time for our last two shows.

For the last time we performed our program and forgot about the last days' stress; everything went great and we were happy about our success. All in all the day passed far too quickly, although the rain started again for some time and the Garrison's parade nearly 'rained off'.

In the evening we disassembled our booth and some time went by, until everything was packed and stored within the cars. Wistfully we said goodbye to the members of the 501st, the R2 Builders, our assistants and the Legoland employees.

Then we got into our cars and finally headed for our homes, knowing, that we would not get a lot of sleep that night. Despite the weariness we thought back to the great time we had and are, of course, looking forward to the next Star Wars Days at Legoland Germany.