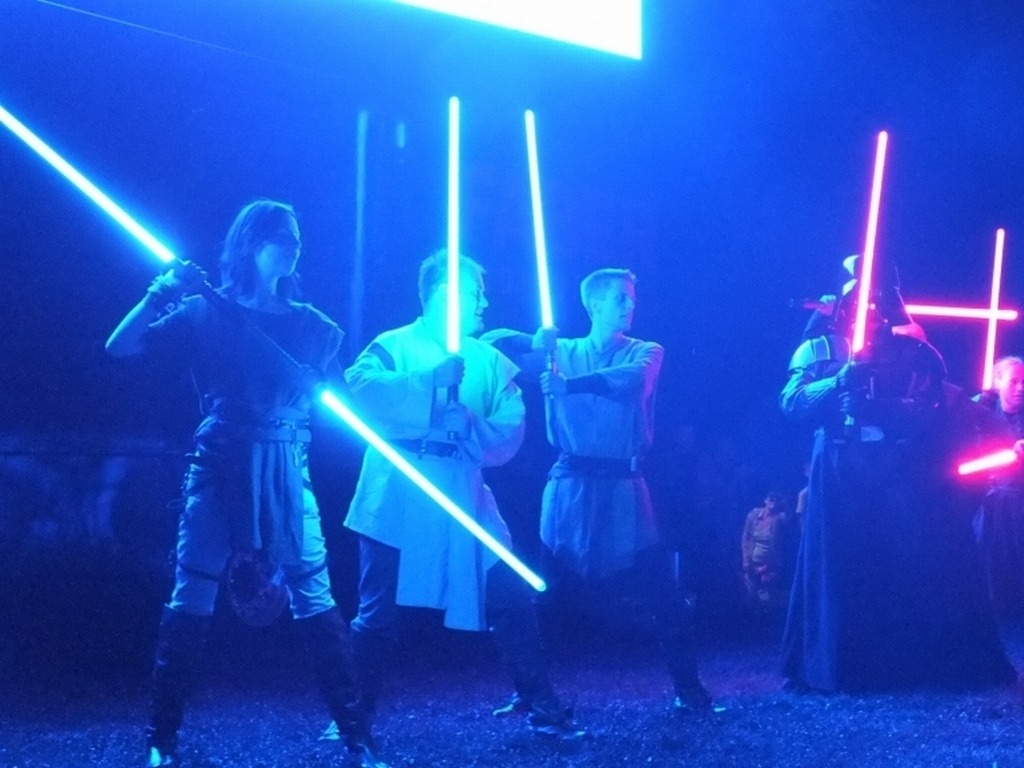 After we had been able to build up our booth at Thursday already, we arrived at the fair trade in Essen on Friday morning quite relaxed.
However we had not as much time to examine the numerous fan booths and merchants as we would have liked, for we needed to prepare for our stage performance in the evening and had to go through our program a few more times until the event opened for the visitors.

Soon we were busy with interesting discussions, which mostly occurred to be in German, but English, Dutch and French as well.

After some successful runs we put our sabers back onto the booth and expected the first visitors to arrive.

Although we had a lot of audience at our booth, we were able to split up into smaller groups and walk around the area now and then to greet old friends and acquaintances, visit some of the panels or simply admire all the costumed people, merchants and fan groups. This way we could even have a look at Mark Hamill, Ian McDiarmid or Kenny Baker, even though only from the distance, for the price of the autograph tickets up to 120 Euro made us stay away.

Regarding all these impressions and experiences, great conversations and new contacts it was no wonder the day passed far too quickly and we had to get changed into our costumes for the show sooner than expected. At 6.30 pm we started for the Grugapark, where the open air screening of episode VI would take place and where we would entertain the audience right before the movie.

After a really long walk through the park we arrived at the scene not one minute early. While we checked our equipment one last time and listened for our announcement, we noticed, that a few hundred people were already sitting in the grass in front of the huge screen.
The sun was still up and for it had been hot outside for more than a week, we were wet with sweat and exhausted from the heat in our costumes, but did not bother to fight through the performance with all the motivation and fun we could offer.

Finally, when the last Jedi had fallen and Darth Vader triumphed, not only the audience was excited with our show, but Mary Franklin as well, the organizer of the Celebration Europe II.
She was so pleased with the program that she offered us a second chance right after the screening and we accepted cheerfully. After two hours and a great movie we raised our sabers a second time and with significantly better lighting conditions.

After this run, that was a lot more error-free than the first one, we packed our things, answered one or another question about our team and took pictures with the visitors.

In the meantime Hannes, Fabi, Larissa and Günther - some faithful assistants and very good friends - had made there long way from Bavaria to Essen and we had a very joyful reunion.
Only a short time later we went back to our cars and, despite our hurting muscles and the weariness, were looking forward to the next two days.