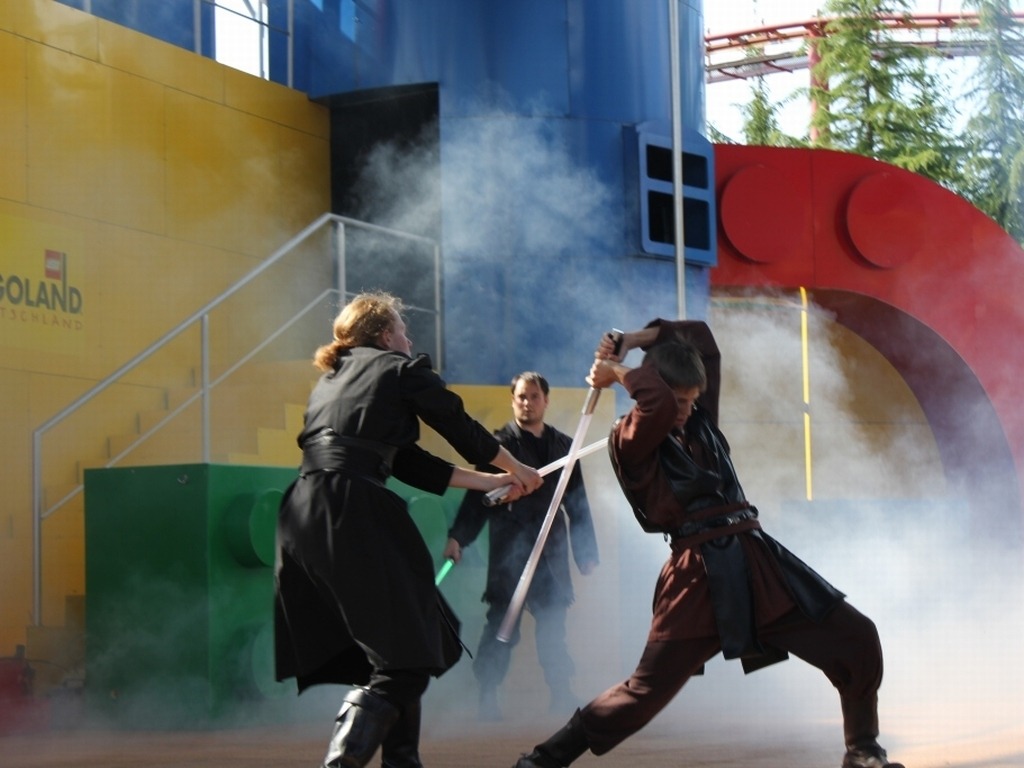 When we arrived at the Legoland at about 9 o'clock after a really short night we began our day with greeting all our friends and acquaintances from the German Garrison and the R2 Builders, who had already built up their stands and tents the evening before and would - together with our team - make sure that there would be the right Star Wars-atmosphere. On this occasion we also got the chance to get to know Daniel Logan, the actor of young Boba Fett in Episode II, while he was sitting on a turntable singing the Indiana Jones soundtrack.

After we had cleaned up the stand for our visitors, we barely had the time to have a short look at the new StarWars-theme at the Miniland. So we sat our own Lego figures into the most known scenes from the six movies and took a lot of pictures. Only a short time later we got back to the entrance to greet the first visitors together with the German Garrison.

Though we did not have such a strong rush onto our stand like in the previous year, we had quite a lot to do until we had to get to the changing rooms at 12.30 am to prepare ourselves for the first show of the day. When we entered the stage at one o'clock after Tim's speech we recognized once more that the arena was filled to the last seat and we would be performing in front of about 2000 people. Motivated by this we presented our stage show "Spinning Lights" that had already had its premiere at Thursday.

Happy about knowing that we would only perform twice a day that weekend, we went back to our room and informed interested visitors about our hobby and took pictures with the sabers with excited children. In the afternoon, when our second performance drew nearer, we hurried back to the arena once again and left the stand in the hands of our capable helpers. But ere we could entertain our audience with twirling and fighting, the obligatory group picture of the 501st Legion with Daniel Logan and Team Saberproject took place at the Legoland Arena.

Then we rushed into the changing rooms for there was not much time left until our performance's start. Despite the pressure everyone was in the right place when the show started and we did a nearly correct performance. At the end of our powers but still very satisfied with the day we spend the last hour until the closure at our stand and allowed ourselves to explore the park in small groups as well

After the last visitors had left the park, we went back to the arena for practicing. For Max already had to leave that evening, we had thought of an alternative program so we would still be able to perform with a small amount of people. Tired and a bit bugged out we trained for some time until we were confident to succeed with our spontaneous program at the next day as well.