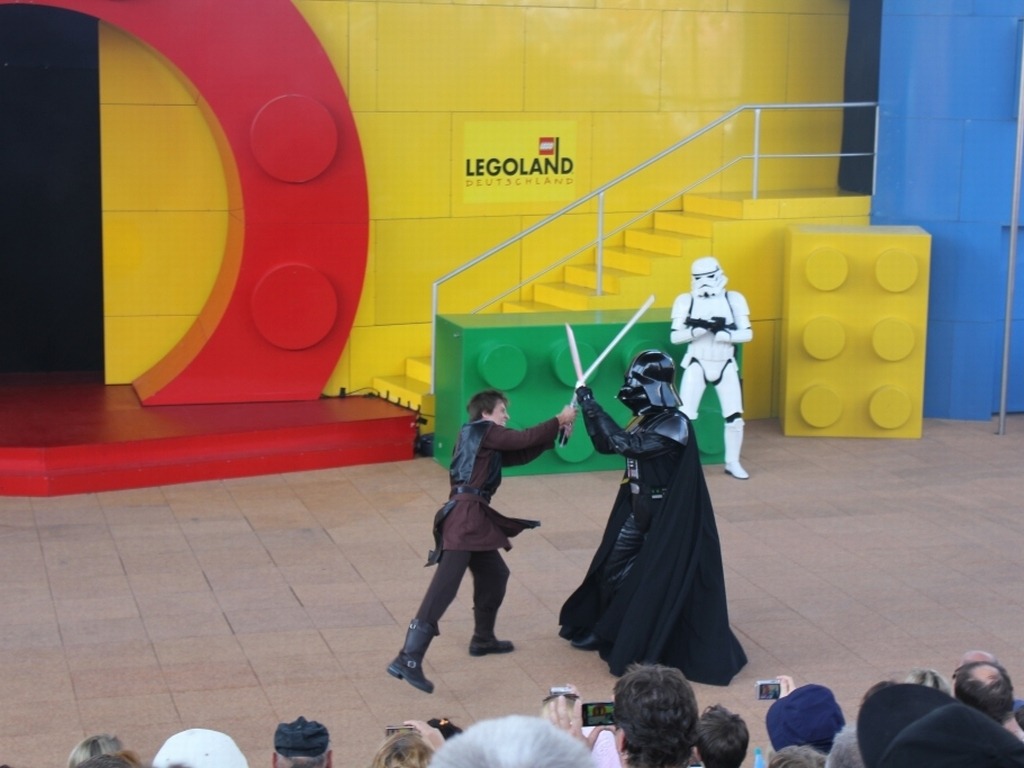 On Sunday morning we made our way back to the Legoland in Günzburg one last time to celebrate the end of the Star Wars Weekend 2011 with the visitors, the 501st Legion and all the others with a lot of fun and action. For our night had once again been very short, we went very tired, but still looking forward to that last day, to our stand and tidied everything up for the visitors.

Despite the pressure of time we assembled in the arena again to train our alternative program once again with the extra-cut music until it would get serious. The dress rehearsal went quite well and so we had still time to get ready for the anticipated rush of Star Wars- Fans.

For we were lucky with the weather that day again, the park filled very quickly and we had a lot to do with answering questions and explain everything about lightsabers to the visitors, so our team barely had the time to explore the park further that morning.

So the morning passed much faster than we had expected and so we had to hurry to the changing rooms at 12.30 am to get ready for our performance. Once again we saw with delight that the arena was filled to the last seat and even beyond that and so we waited impatiently for the show to begin. Even though we only performed our alternative program, which we had planned just days before - and by that rarely trained as well - the audience was thrilled and especially the entrance of our Vader with his stormtroopers was a success.

After this brilliant success we had to hurry back to the stand, because we knew from experience that the rush would grow immediately after our shows. So we spent our time until the next show with taking pictures with lightsabers, fighting with kids or watching them playing with the Jedi-weapons and of course explained again a lot around lightsabers. In the afternoon we went back to the arena for the last time for the last of ten shows at this weekend. The last show after all was, despite the little bloopers or maybe even because of them, another great success and we got a lot of applause.

When we had changed our Jedi- and Sith-costumes to our usual team shirts, we split up into small groups: some of us finally got to eat something or strolled through the park while the others went back to the stand and tried to manage the mass of visitors and inform them as good as possible.

This way our last day at the Legoland slowly got to its end and when our room closed its doors at six o'clock, we were happy to have some time left to wander around a bit and relax until we would start to break down the stand one hour later.

After we had left the park, we had a last meal together, until all of us started their way home at midnight, looking back at a wonderful and successful weekend that was a lot of fun and at which we had the chance to meet many interesting people and make totally new experiences.