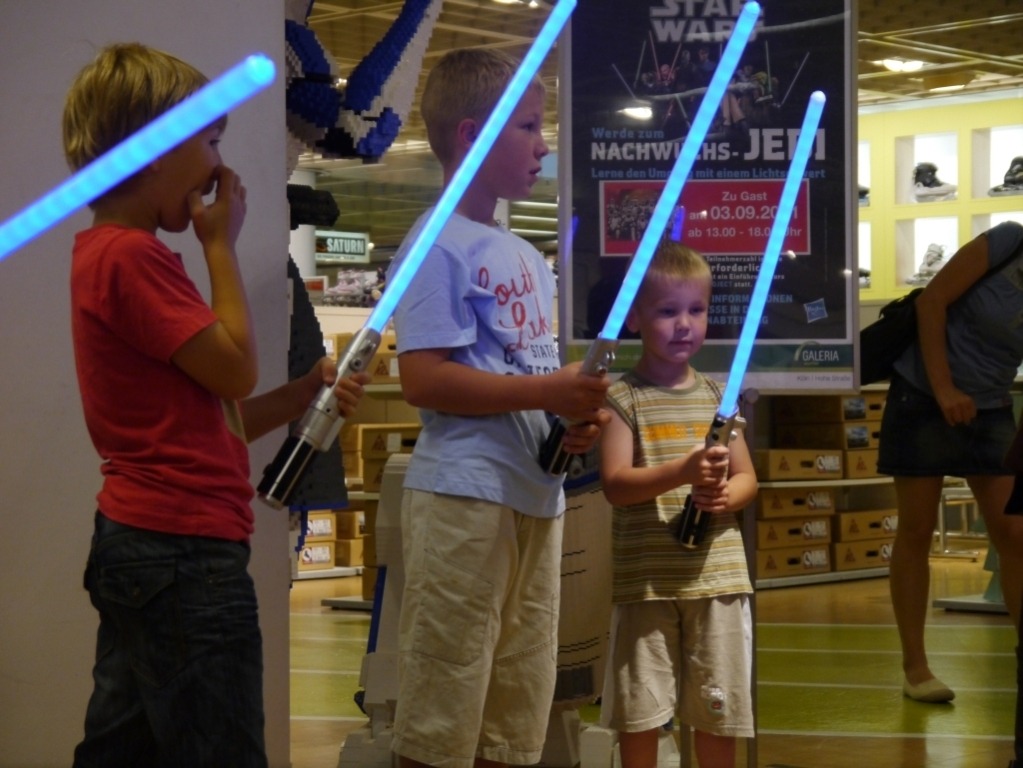 Hasbro and Saberproject on Tour through Germany - 2011

From the 3rd September and the 12th November the toy department of many stores in Germany changed into a Jedi-academy:

The reasons were our workshops, which we offered in cooperation with the toy manufacturer Hasbro all around the country. During 11 a.m. and 6 p.m. we taught mostly young interested visitors how to handle the Jedi weapon.
While we used our self-made show sabers, the budding Jedi were equipped with the Ultimate-FX by Hasbro that survived some very hard downfalls unharmed.

For we often had workshops in two different cities at one day, we divided the team into two groups, so Tim, Max and Andre could do the workshops in the north, while Jana, Markus and Chris took the south.
In costumes, team shirts and armed with our sabers we waited for the great rush of participants.
Often parents decided spontaneously to let their children being instructed in the high art of Lightsaber combat, so our workshops were nearly always booked up.

After each of our six participants had been equipped with a Lightsaber, we started explaining the basics of combating like the right handling of the Jedi-weapon. For this kind of combat is marked by spectacular twirls, we taught the budding Jedi an easy basic spin as well, on which advanced and more complicated tricks are based.
Da sich der Lichtschwertkampf durch viele spektakuläre Wirbel auszeichnet, brachten wir den Nachwuchs-Jedi somit auch einen einfachen Basiswirbel bei, auf dessen Grundlage weitere und kompliziertere Tricks aufgebaut sind.

When our agile learners started off the first fights, we moved on to the basis combat system, which consists of six beats. After the kids had understood these, they were finally allowed to fight in pairs, at which one took the role as attacker and the other as defender. We went through the rows, sometimes corrected the standing or the handling or repeated some of the beats, when a child could not remember everything.
Nachdem die Kinder sich diese eingeprägt hatten, traten sie in Paaren gegeneinander an, wobei immer einer die Rolle des Angreifers und einer die Rolle des Verteidigers einnahm.
Wir gingen durch die Reihen, korrigierten hier und da eine falsche Handhaltung oder wiederholten die Schläge noch einmal, falls ein Kind sich nicht mehr erinnern konnte.

After 20 minutes that decayed far too soon in the eyes of our participants, the next group waited already for their turn. We ended the current workshop, gave out special certificates for each learner and collected our sabers, although they would not often be given back willingly..

So verging der Vormittag ein ums andere Mal wie im Flug und wir waren froh, als unsere erste Pause bevorstand.
This way the morning passed more than one time quite fast and we were happy, when our first break was in the offing.

After a rest and a rapid lunch the workshops went on until we dismissed our last budding Jedi at 6 o'clock p.m. with their certificates and started packing up.
At this point we'd like to thank Hasbro for the awesome collaboration and the great service of all involved stores.