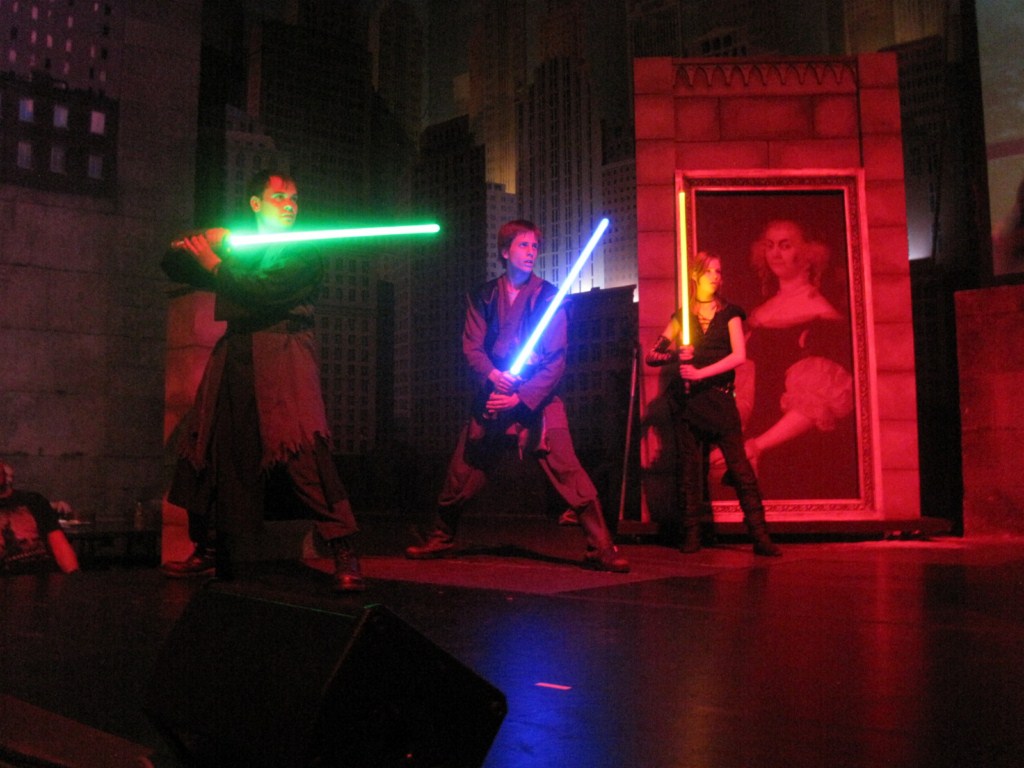 After a really short night we made our way to the Movie Park Germany in Bottrop-Kirchhellen at about 5 o'clock in the morning. When we had brought our cars into the "Western town", we started to build up our stand - which is now equipped with video screens only for news and show times as well - in the "Warsteiner Saloon".

After having finished the stand with a little delay shortly after 9 o'clock with all our sabers on it, we went to the "Van Helsing Club" to have a look on the stage and train our program one last time.

For the park would open at 10 o'clock, we barely had the time for one complete run of our program, until we headed back to the stand to welcome the first visitors of the day. Gradually more and more visitors found their way to our stand so we were quite busy with handing out Lightsabers to excited small and bigger kids for pictures or only just for fun, answering questions about modifications and customs or exchange some experiences.

We also had the opportunity to meet familiar faces, because the 501st Legion kept our company in the "Warsteiner Saloon". When Star guest Richard LeParmentier started his autograph session, the rush onto our stand decreased and we had the chance to explore the park in small groups not without trying one or two interesting rides.

After a very short and quick lunch, we headed to the changing rooms at about 2 o'clock pm to get ourselves changed for the show at 2.30 pm. We used the remaining time to get back to the stand and arrange for enough sabers for our performance, so we could easily replace malfunctioning blades or other blackouts.

The "Van Helsing Club" was filled up to the last seat and so we first presented our video "Battle on Hoth" and after that our stage performance "Spinning Lights", which quite caused excitement within the audience. Content with what we had shown our visitors, we got back to the stand, which we had trustfully given into the hands of our helpers. Speaking of this, we especially want to thank Daggi, Luca and Hendrik, who have accompanied us many times in our chat as well. We spent the next few hours in the "Warsteiner Saloon" explaining the Lightsabers' differences to interested visitors and trying to have an overview over all sabers in the room.

When our second performance started at 5.15 pm, the audience clearly was a lot smaller as a result of the advanced time. Nevertheless we fought motivated and with a lot of pleasure across the stage, so not only the audience and ourselves but also the organizers of the event were very content.

After the park had closed its doors at 7 o'clock pm, we began to dismantle our stand, brought everything back into the cars and drove home after a long and exhausting, but also very successful and enjoyable day.