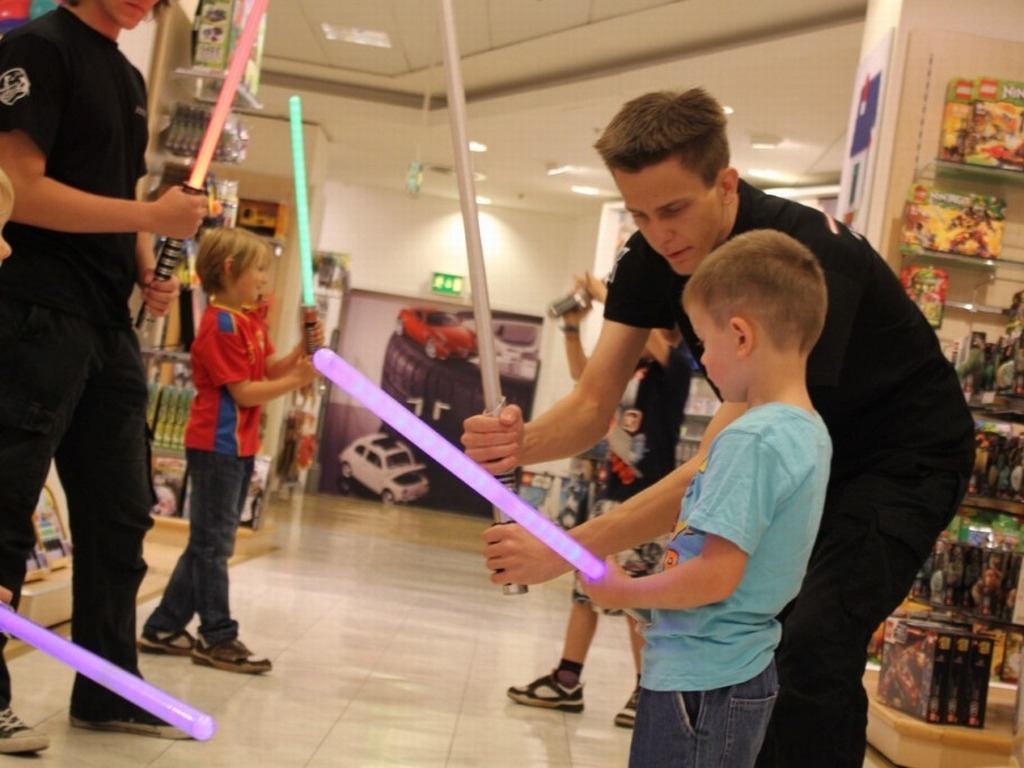 Hasbro and Saberproject on Tour through Germany - 2012

After our first workshop-tour was encountered great interest in autumn 2011, together with Hasbro we decided to organize two tours for 2012. So we were traveling across Germany not just once, but twice in the past year to instruct young and old Jedi in the basics of lightsaber combat at the stores of Kaufhof.

Da wir an manchen Wochenenden in zwei Städten parallel zugegen waren, teilten wir uns in zwei Gruppen, sodass die eine Hälfte den Norden abdecken konnte, während die andere im süddeutschen Raum aktiv war.
On some weekends we were in two cities at the same time, so we split into two groups so that the one could cover the north, while the other was active in Southern Germany. Sometimes we had bigger, sometimes slightly lower numbers of participants, so we could stretch our workshops from the usual 20 minutes to half an hour to teach especially interested younglings beyond basics. This change let time never run slowly, even though we attended the stores of Kaufhof from 11am to 6pm for our young Jedi training.

Especially in the last workshop tour there were significantly less reservations made as in the previous, we made sure that the vacancies were filled with walk-in customers, so that each participant had his fighting partner, with whom they were able to practice the strikes shown by us. The mediated fundamentals should allow the students to be able to train without serious risk of injury at home. Who brought his own lightsaber was of course allowed to use it. For the others we had a choice of red, blue and green Ultimate FX Lightsabers from Hasbro, which are designed for children in size and weight.

Especially our younger students were very excited so we often informed about the different lightsabers after the workshop. Particular interest was always paid to our self-made sabers, though their price was for buyers a resort to the much more favorable Ultimate FX Lightsabers from Hasbro.

So in the evening we looked back again on a busy but successful day, and sometimes begin a quite long ride home.

We hope to offer workshops in the future again and would be happy for more interested participation.