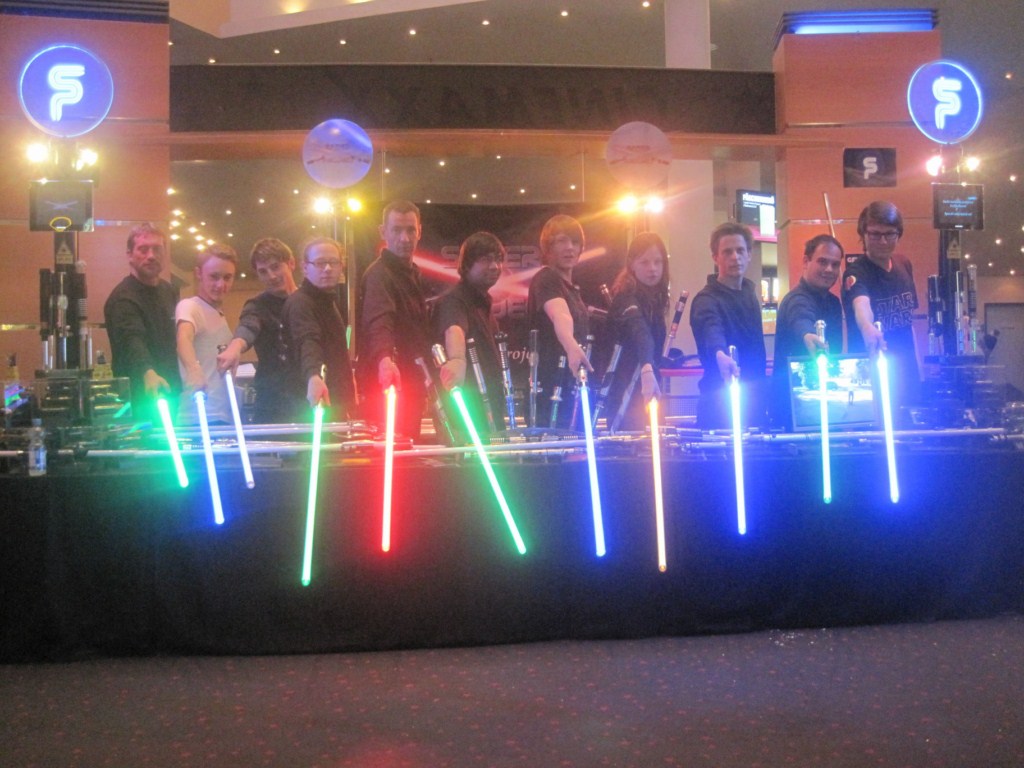 Episode I in 3D at CinemaxX Mülheim

Appropriately to the start of Star Wars Episode I in 3D we and our stand were guests in the Cinemaxx at the Rhein-Ruhr-Centre in Mülheim.

We already met in Mülheim on Friday evening to build up the stand for the coming weekend. When we got back to Andre's far after midnight, we went to bed quite soon, so we would be rested for the next day.
Even though the first show would not start before 12 and we did not need to be in the cinema much time before, we got up early to pack up the last sabers and drove to Mülheim afterwards. This time Kulti and Daggi were taking part as our helpers, but Luca, Hendrik and Dino (also true visitors to our chat) as well arrived in the cinema very quickly to disburden us.

Soon we realized that the first show of the day would not be as full as we had expected and Tim, Daggi and Chris decided to take the chance and watch Episode I in 3D. But before the movie started, the cinema's owner had enabled our team a very special highlight: they had agreed to show our short movie Battle on Hoth (BoH), that had been shot during the vacation of some of our team members, on the great screen.
Indeed we had some technical problems in this first show, however, we were excited to see our own movie on the big screen in cinema. After all, the movie was presented before every show and so the initial mistakes could be corrected quite soon.

But the first show was not only because of BoH a very special experience: the Cinemaxx at the Rhein-Ruhr-Centre is equipped with D-boxes - seats, which vibrate matching to the movie's plot and make Star Wars 3D to a great 4D experience.

After the show we hurried back to the stand to let the visitors try out some sabers and answer various questions. That way the day went by quickly, but we knew we had to hold the line until the last show was over at 2 o'clock in the morning. Tired we went looking for chairs to rest a little and we had not much to do at the moment. While some of us fell asleep, the others sat in front of the stand and talked. When the last visitors had left the cinema, we also packed up our things and drove home.

The next day we already met in Mülheim at 10 a.m., because this day the German Garrison would be in the cinema as well to get the visitors into the right Star Wars mood with appropriate costumes. We were happy to see some well-known faces under the masks and helmets, chatting or fighting, because the entrance hall was quite empty during the movies. On Sunday as well we had great help from our aiders - Thank you so much for this again!

So this day also went by quicker than we would have thought and after the last visitors had left the cinema at 8 p.m. we started dismounting our stand. Exhausted we headed home some hours later.