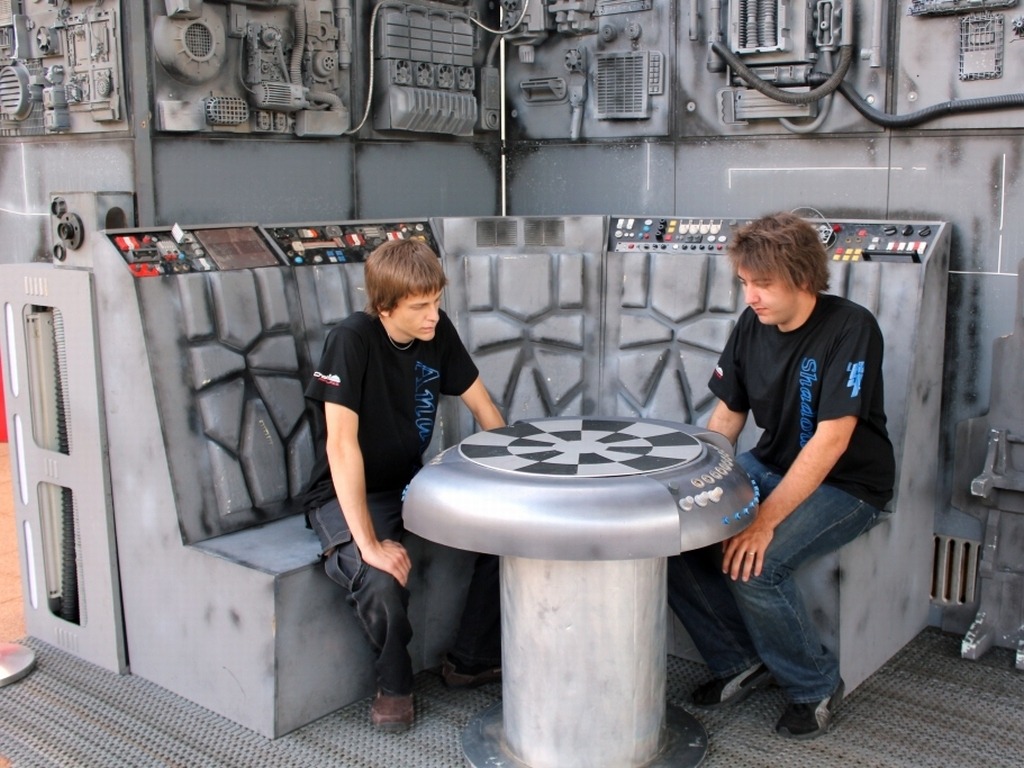 We arrived at the Legoland at 9 o'clock in the morning, still slightly exhausted but in a good mood.

Until the park opened at 10 o'clock we had the time to clean up the stand and put the sabers and all other exhibits back into their right position, so the first visitors of the day might find our stand in its full magnificence.

Our shows should take place at the same time as the day before - at one o'clock pm, at 2.30 pm and at 4 o'clock.
After noon and a brief lunchtime we already needed to head for the arena to change into Jedi and Sith for our first performance of the day. When we entered the stage after a short and delighted announcement of Tim, we were quite excited to notice that the arena was filled up to the last seat - for each show that day.

With twice our motivation we battled across the stage, let our lightsabers whirl and got a huge applause.

We expected a great amount of visitors in the whole park because of having weekend and very good weather and we were quite right: after every show we had a long queue waiting in front of our stand and most often the stand had to be occupied by all team members and helpers, for there were so many questions and people at once.

It was hardly possible to go off wandering around the park in smaller groups or even get something to eat.

When the day came to its end we were all very tired and so it came to pass that we did not give an additional show at the park's entrance. After all there also stood a grand AT-AT from the Belgian Garrison that took a lot of space and would make a performance quite difficult.

After having finished our training more or less successfully, we strolled towards the exit and already met first members of the German Garrison and the R2 Builders Club, who were occupied with building up their stand. For we know some of the members quite well by now we took our time and had some chats with our acquaintances before we brought our sabers back to our own stand. There were lots of people as well, stands were built up and first impressions exchanged. But we were very tired after this busy day and so we did not stay for long and went to the exit, after all looking forward to the coming weekend and happy not to be the only fan group in our room anymore.

We left the park at about 9 o'clock pm and drove back to our hostel to end the day smoothly in the same good mood as it had begun and told each other from the impressions of the day.