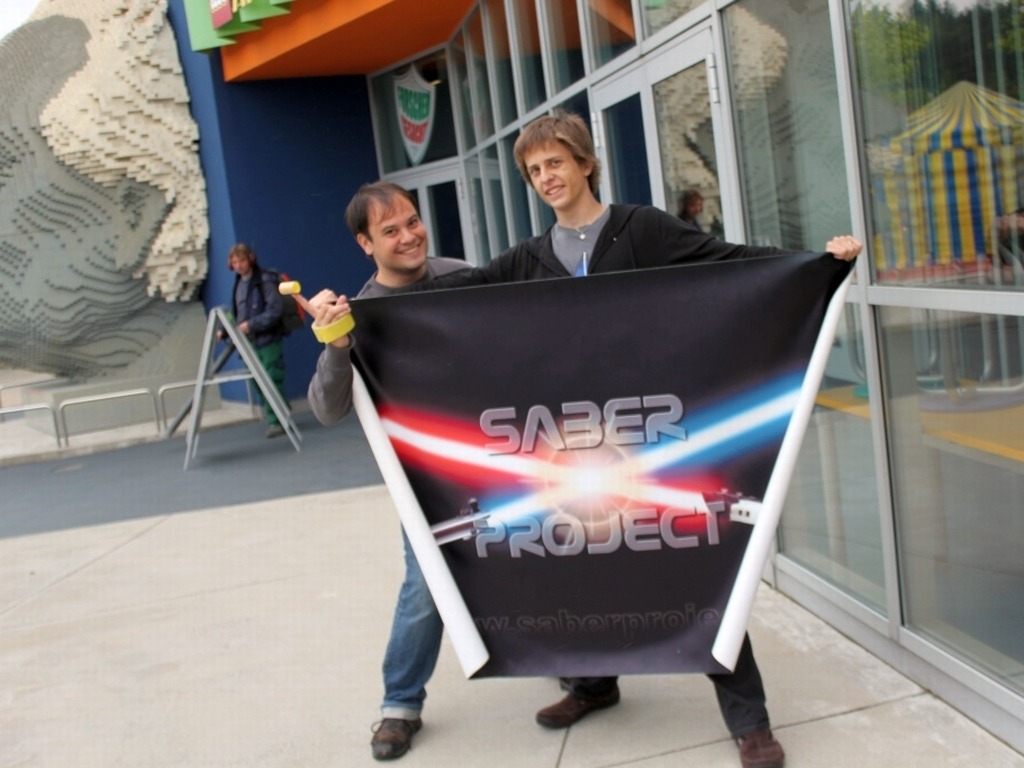 In the very early morning we arrived by and by at the Legoland in Günzburg. Totally exhausted from our journey, but still full of motivation we began to bring our equipment into our room. En masse we started building up the stand and exhibiting our sabers and minis.

After having finished the stand we still had some time left to train our choreographies one last time until the park opened at 10 o'clock. As expected we had quite an inrush to our stand. Many questions had to be answered and while one part of the team talked to the visitors, the other went off searching for breakfast, for we had not eaten since our arrival at the park.

At 12.30 am the team left the stand to change into Jedi and Sith for our first show at one o'clock at the Legoland Arena. During the show some of our helpers and Alex (Shadow-Chao) stayed in the room to watch over our equipment.

After having changed there was not much time left - some last strokes were trained again and then we had to start off to the stage. We were very astonished when we saw the mass of people the arena was filled with. Hidden we postured ourselves on the stage, while Tim (Anatim) announced the team and our new performance with a few exciting words.

Afterwards some of us stayed in their costumes, because the next show was only about one hour ahead. So we got back to the stand slightly sweaty only to see with enthusiasm that the rush onto our stand had actually gotten bigger after our performance.

Time passed faster as we would have liked and so we had to get back to the stage for our second show only moments after we had come back to the stand. Again the whole arena was full with spectators and we gave everything to present our fans an excellent program.

After our second show we got hungry and so we started leaving the stand in small groups to visit the lunchroom. But still we did not have any time to relax, for our last show for the day was at 4 o'clock in the evening.

So we got back to the arena one last time and once more the amount of visitors was spectacular. When we had finished this performance with bravura, some of us went through the park in their costumes, until we all changed back into our team-shirts and got back to the stand together.

We had not calculated this kind of stampede, because many visitors, that had seen our show, now came to the stand and had some questions. But at 6 o'clock our room was closed - which does not mean that we had leisure-time now!

Like last year some of us took their sabers and went to the park's entrance to twirl or to do some tricks. Moreover we showed some of the choreographies again and soon a big circle of spectators had formed around our team. With this performance we supported the charity campaign of the Legoland: "Merlin's Magic Wand" that aids ill and needy children. We left the park one hour later, tired and exhausted from our first day at the Star Wars Event to get some food and to get back to our motel.