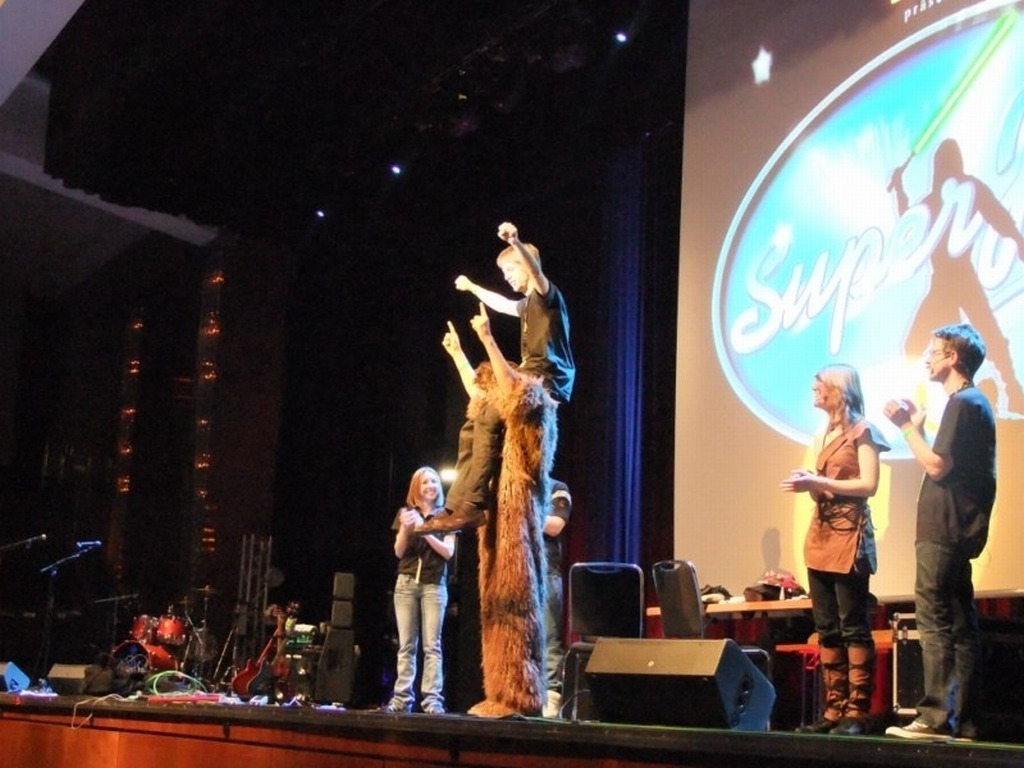 After only a four hour's sleep we got back to the Maritim Hotel at 8.30 AM. Tired but good-humoured and motivated we prepared our stand - for the first visitors would be arriving at 9.30 AM and every saber should be in its right place. In the meantime we took again pictures of the team members and of our stand, which had already been an attraction on Saturday, and practiced our choreography one more time, because we would be presenting this during the main show in the evening.
Anschließend schossen wir erneut Fotos vom Team und unserem neuen Stand, der bereits am Samstag für große Aufmerksamkeit gesorgt hatte, und übten noch einmal unsere Choreographie, die wir am Abend in der Hauptshow präsentieren würden.

After a short briefing the first visitors started to arrive within the convention area and that way we spent the whole morning explaining lightsabers in general, the advantages and disadvantages of each specific lightsaber, had interesting conversations or started dueling either with curious kids, who never had had a lightsaber in their hand before, with stormtroopers, dark Sith lords or other team members.

At 1.00 PM the time had come for our lightsaber-workshop that should take place in the Coruscant area. Shortly after Tim and Andre had explained the different types of sabers they got to the point right away: The participants learned how to use the Attack/Defense Combat System, what they had to keep in mind and which techniques could be helpful.

To demonstrate this, Tim and Andre chose some volunteers to put their explanations into action right on stage. This way lightsabers swirled through the air and there was much laughing and battling. The workshop was a great success and we were very satisfied for the participants as well had had a lot of fun..

Meanwhile the rest of the team had been very busy at out stand with answering all the visitors' questions, so by and by we went off to the nearby airport to get ourselves some food - just like the other day. When ours stomachs had been filled and the whole team had come back to our fan-room, we took the chance to hunting for some autographs or pictures with the star guests. In doing so we got to know Steve Sansweet to whom we got connected so well that he even agreed to introduce us during the main show.

As the day went on, the evening and our performance drew nearer; so we started to prepare ourselves until we went to the final dress rehearsal at 5.30 PM. In the backstage area a wardrobe had been declared to the personal Saberproject-wardrobe and after we had got changed into Jedi and Sith we started off to the stage to perform our whole show one last time.

When the area had been finally opened for the audience at 8.00 PM, the team sat down nervously, but confident in the front row to have a good view on Saskia and Jana who would announce us together with Steve Sansweet. Afterwards our fan-movie "Battle on Hoth" was shown on the great screen and caused a lot of ardor within the audience.

Following this the Super-Jedi Contest took place in which three candidates had to compete in various games. We, too, took a part in this: Tim was the representative of Saberproject and together with his master, the graphic artist Randy Martinez, he fought for victory and the title of the "Super Jedi".

During the contest we showed our performance as well. When the music began, Scoulcher entered the stage deeply cloaked. Only a short moment later Shane appeared with her violet lightsaber; she had been dueling Scoulcher for quite a while until he was able to fell her down with a superior stroke of his saber. While Scoulcher attached the second part of his saber staff for the next fight, Swaktor sneaked through the curtains to duel the dark Sith lord himself. After a quick exchange of strikes, both of them suddenly stopped, facing each other, not really knowing what to do now. Obviously none of them wanted to continue the battle - or did not know how. After they decided to swap their weapons with a throw, which nearly failed and in which Swaktor even nearly lost his saber, the combat continued until Swaktor finally encountered death.

In the very moment, Swaktor died, Anatim came onto the stage in a hurry; but before he could attack his opponent, Scoulcher got unexpected help from Pantaloon, who faced Anatim with two sabers. On the other hand Anatim, too, got some help: from the other side of the stage DarshaJela appeared.

That way two fights at once started off, which Anatim and DarshaJela could decide for themselves - the bright side seemed to triumph. But only a moment later the destiny turned again, because Bertuzzi, the dark Sith lord, faced the two Jedi with his staff saber. After the two of them had been able to duel Darth Bertuzzi for a while, he got to knock out Anatim and faced DarshaJela, who had to defend herself alone now. Bertuzzi did not have a mighty opponent in DarshaJela and killed her easily.

Meanwhile Anatim was able to take part in the battle again and attacked Bertuzzi with new energy. When he had finally disarmed him, the bright side seemed to have a new advantage after all. Bertuzzi, however, took dead DarshaJela's saber and attacked Anatim. After a short but furious battle Anatim hit Bertuzzi with his saber (if it was by accident or not we do not know). Feeling quite dizzy for a moment Bertuzzi decided to move on and fight his opponent Anatim. Nevertheless Anatim stayed the stronger one and felled down the dark Sith lord. Anatim seemed to have gained victory, but again his fate changed … In the shape of Darth Vader, Shadow-Chao appeared on stage and killed Anatim without any efforts. And again the dark side had won.
Die dunkle Seite hatte wieder einmal gesiegt.

Even though the performance had some bloopers we were content with our show all in all, for the audience seemed to have enjoyed our show pretty much and we got a lot of applause. After a few more games and disciplines it was official: Tim won the contest and was made the "Super Jedi". His price - a brand new Xbox 360 - was presented by the dark side of the force by Lord Vader and the Imperator of the German Garrison, guarded by a huge battalion of stormtroopers. Excited we applauded our Super Jedi and knew that there would be a hard day coming up with a lot more to do at our stand.

Although it was nearly midnight when the show had finished, our con-day would not stop for a looong time. Right after the show there namely was a party for all con-visitors and exhibitors at the hotel-bar in which we wanted to take part after our great show as well. And while time drew on, Markus and Andre fell asleep on the sofa, Saskia danced with Matthew Wood and the others , too, danced, had a drink or talked, the hours passed by until we finally drove home at about half past two - knowingly that none of us would get more than a two hour's sleep that very night.