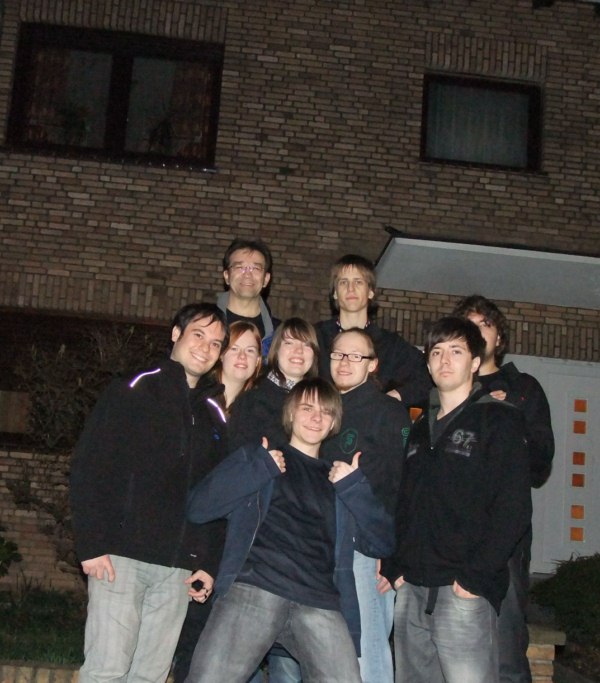 Although we had had a very short night the next morning went on as the days before. The stand was prepared for the visitors conscientiously and moreover we had to clear a space for a new exhibition object: The birthday present for Andre - the Shadow-Leader! The black fighter jet with its Saberproject-vinyls went very well with the general image and endowed our stand with something special.

After a short photo-shooting with our new achievement we finally had to get back to our positions, for the first visitors were beginning to drop by. Their questions needed to be answered and lots needed to be sold while some of us used their spare time to practice their abilities with a lightsaber in the hotel's atrium and to get them some videos of their training.

In the meantime we tried to collect some more autographs. We succeeded in getting one of the autograph-coupons with which one was able to get all the Lucasfilm-stars' autographs into the voucher. That led us to some pictures and several conversations with Matthew, Randy and Denise. The latter asked how our Stormsassi had gotten rid of her make-up the last night.

Only a short time later the panel with Matthew Wood took place. He talked about his work, what he was doing at the Lucas-farm the whole day and even brought his software, so he could let volunteers from the audience sound like General Grievous or a battle droid. All in all this experience was very interesting and quite amusing after all. As least as amusing was the following talk-show with Jake Lloyd and Wanja Gerick. The taciturn Jake suddenly was able to speak whole sentences and had some sense of dry humor that two of us nearly started crying while laughing ;-) This way we got to know that Jake really likes to play videogames; however he does not like the internet much. Among other things he is going to college right now and wants to be an editor later on. Wanja was asked very much about his work, but most of them had already been answered in his last panel.

At 4:30 PM the time for the closing-ceremony had finally come. Randy Martinez and Denise Vasquez played two very emotional songs as a farewell-gift. The first one was Denise's "The Perfect One" where goose bumps were preprogrammed. The second one was a song from the view of Anakin, certainly addressed to Padme, which Randy had written himself. It was a worthy farewell, especially if one considers that all the other stars simply entered the stage for another short moment, said one or two sentences and disappeared again.

With this the JediCon 2010 had officially ended. For us the time came to dismantle our stand while seeing off the last visitors, new acquaintances and surely - somewhere inside - the other team members as well. After we had loaded everything and ourselves into the cars, for the most of us the way home began. The day slowly got to its end and we could take home all the memories of one of the biggest events of the year with hundreds of other Star Wars fans.

An unforgettable time in which one has learned at least one thing: Star Wars ROCKS!