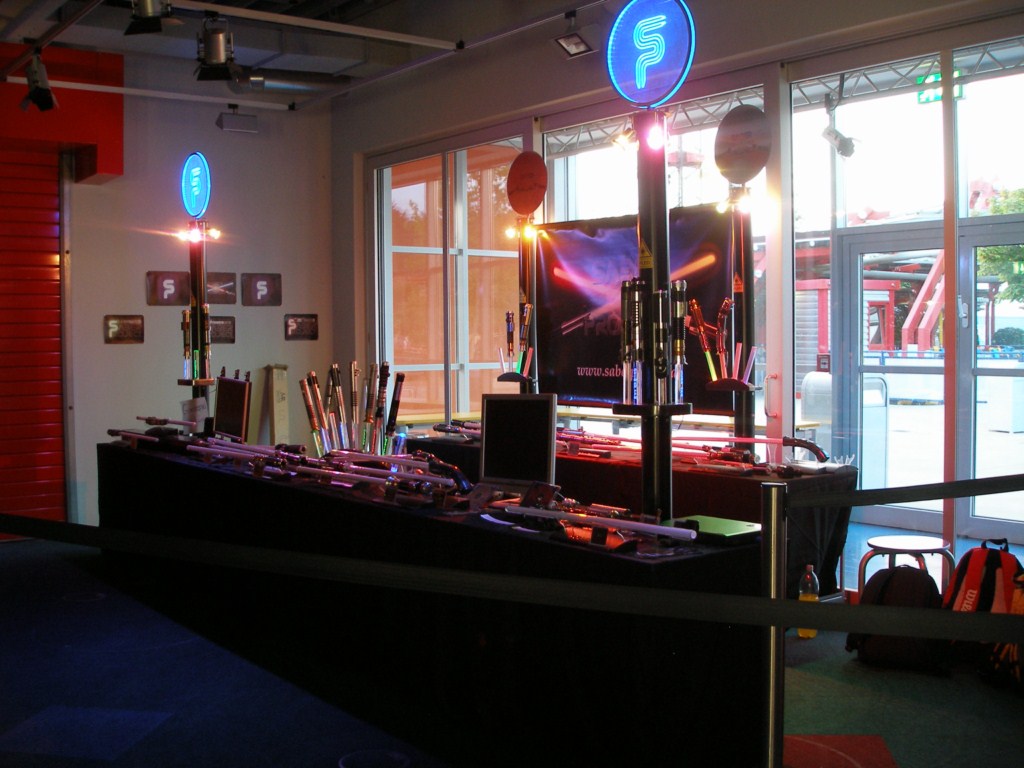 After we already had been walking around the park the whole Friday trying out the rollercoaster and having a lot of fun, we started building up our stand within the Mindstorms Center in the evening. When we had finished our work at about midnight, we drove to our hotel and went to sleep, for the approaching weekend was going to be rather busy.

In the next morning we arrived at the Legoland at 9 o'clock and at first we had to train our choreographies for one last time. The time flew by far too quickly and a few minutes before 10 o'clock we hurried back to our stand, because the first visitors would arrive quite soon.
Nachdem wir unser Programm im Schnelldurchlauf durchgeprobt hatten, beeilten wir uns, rechtzeitig am Stand zu sein, da um 10 Uhr die ersten Besucher kommen würden.

Quickly a long queue had formed in front of our stand and we were all very busy with answering questions and demonstrating all kinds of lightsabers to children as well as adults.

This way we were quite distracted until noon, when we had to pass the guidance of our stand into the hands of the German Garrison, because we needed to get changed for our first show at twelve o'clock. After we had changed into Jedi and Sith we waited for our show to start behind the stage. We were very impressed to see how many people had come to our performance and that many visitors did not find a place so they had to wait for our second show at 5 pm.

So we fought our ways up and down the stage with several different choreographies, until Anatim finally had won the battle for the Jedi. But suddenly Shadow-Chao as Darth Vader entered the stage and killed the Jedi with a few short strokes. Especially the kids within the audience were excited with our performance and so it came that as we made our way back to the stand we were stopped more than one time and asked for a picture or an autograph.

When we arrived back at our stand we came to understand that the queue hat not gotten any bit shorter and the stormtroopers of the 501st legion were all busy with answering questions and handing out the lightsabers - they, too, seemed to be quite happy that we finally returned. For the people coming to our stand did not grow any less, at 4 pm we decided to close the stand for the duration of our second show. After another short training outside the Legoland we headed back to the arena, changed back into our costumes and prepared ourselves for the next performance.

Again the audience was more than huge, again many of them had not found a place and had to wait. Because of the great resonance another show was announced and we were allowed to perform our second program twice, so that those, who had not been able to see the show before, had a chance to watch it this time.

There is no way we could have imagined the first performance of our second program any better than that: In spite of some little mistakes the show went without any problems and we succeeded in getting the audience even more amazed and thrilled with our program than at the first show in the morning. Because of this some of us stayed in their costumes and walked through the park to take some more pictures and eventually even give more autographs. The rest went back to our stand to deal with the great number of visitors who wanted to see us and our different lightsabers.

Exhausted, but very content with the first day we finally closed the Mindstorms Center at 7 pm and gave our sabers some time to recover for the next exciting day. But we did not stop that early: spontaneously some of us started performing their choreographies for the visitors about to leave the park; quickly a large circle of visitors had formed around us, who asked a few more questions and even took some time to congratulate us on our nice show. When the park should be closed at 8 pm, we still had a big audience, so we and the Legoland- Team as well, had to go for a few extra hours - but after twenty more minutes we finally stopped showing our skills and got the Legoland-Team - and us as well - their highly earned free time.