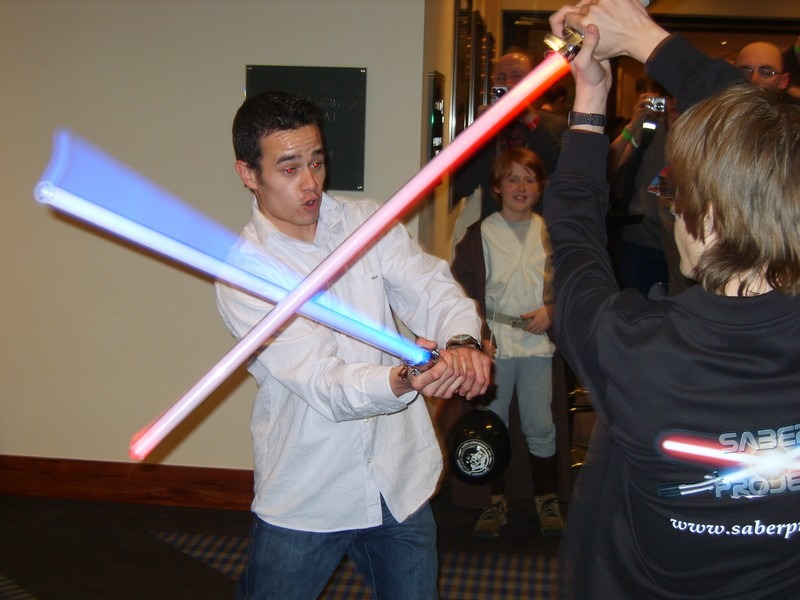 Saturday * More chatting – Daniel Logan - Saturday Night Star Wars Fever
At about 12:00 PM we were on the way home, slept at about 2:00 AM and had to get up at about 6:00 AM. We met at 8:00 AM at Maritim Hotel and went to the Fan-Area "Alderaan" at 8:45 to arrange our stand. The first visitors were there, too (curious, the entrance was at 10:00?!) and it went on normally: stand at the stand in stratas, answer questions or look around the rest of the con.

Suddenly Daniel Logan (Boba Fett in AotC) came to our booth and asked for a Maul-Saber, took a double-sided-lightsaber and let go. Alex´ Dad confronted him and fighted him, so did tim after that. When Daniel noticed that he couldn´t win against Tim with a double-sided-lightsaber, he ran to Lukas and grabbed his Luke ANH out of his hand. But Tim also won against Daniel, so we won free autographs. That was a little alternate for Ray Park, who wasn’t able to come.

After that we went back to normal, a few fights in the Fan-Area „Alderaan“ were fought, we gave infos and let the visitors try some sabers.The talks often became more detail, sometimes there were infos on the tables. The most impressive thing was the Hyperdyne. It was showed in front of a normal FX saber with its brightness, volume and feeling (the vibrating-type motor is very nice). After this saber (for some in front of the Hyperdyne) came the PlecterLabs Saber with its different sound banks, like chainsaw, steel sword or the function Isaber, which is a MP3-Player. Everything was shown, defined and with the most was fighted.

In between came Josef with his Bodypainting-Darth Maul costume to our stand (Tim, Alex and Lukas knew him from the Celebration Europe 2007 in London). He asked for a Maul FX for the costume contest. Of course we helped him, as we did to a member of the Rebel Legion with a blade for his saber. In the evening the room was closed and we went downstairs to see the Saturday-Night-Star-Wars-Fever Show.

The moderation was sadly involuntarily funny, didn’t have anticipaion from Star Wars, and had anything goofed. At the custome contest Horst first forgot to let the jury rate, then he had often fluffed (like Bob Fett) and said bad jokes like „Use the fork, Luke“ all the time. When a con visitor made his girlfriend a proposal, Horst said a poem to the issue „kiss“. That was very terrible. Josef didn’t win a prize at the costume contest, someone in a Amidala had won rightly. A family with „mini-wookiees“ had won the third place. The white Revan, who used our blade, showed in his show, that his saber could change the color and had led voting which was the best.

The highlight at the custome contest were two guys, those used the donkey principle (one played the forelegs and the other played the hind leg.) and made a brilliant AT-AT costume! After that the Playback-Band „Sarlacc Survivors“ came and made with their Show a very good atmosphere, which was destroyed by Horst after the second addition. When everything was finished we got back home.