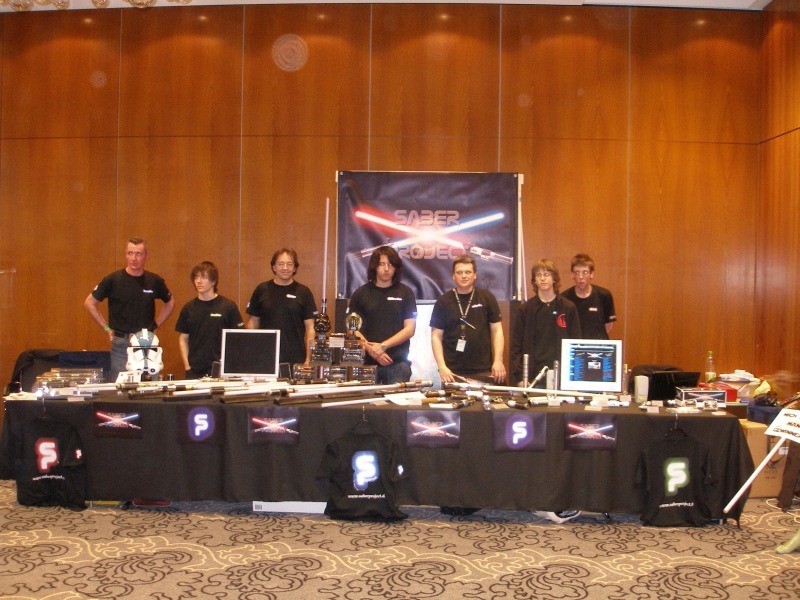 Friday * Building-Up – parking – chatting
Exactly at 5:15 am we were woken up by the alarm-clock ...

The whole team waited half a year for this day, the first day of Jedi-Con.

We had breakfast and packed three cars, what was harder than we thought. At eight o’clock we were at the delivery entrance at Maritim Hotel. After a small talk at the sale of tickets we could load off and bring our stuff to the fan-area. Though the weather was bad, we could place all things halfway waterless.

The hotel personal decided to build up some bound bands around our parked cars which we parked at the limousines-car park. After that we could drive away and we got an advice to use the basement garage, what cost 26 euros the day but since we were issuers there “could be done something for it”. When we walked out of the garage the friendly personal told us, that we wouldn’t get a reduction, but all car parks in the near are free. So we walked back into the basement garage, payed 3, 50 euros for 10 minutes parking and parked at the roadside the next corner. But this should have consequences ...

After we parked successfully, we got the tickets and went into the fan-room and the team built the stand up. After two hours, many organization and fun/sweat our Saberproject Jedi-Con stand was built up! This existed out of two PCs, all FX-sabers and minis, customs by jk-sabers, one Hyperdyne and one PlecterLabs. Our banner decorated the whole stand on top of that. Our lotteries were built up and ready.

At 12 o’clock the first visitors came and the Jedi-Con began!

The stand was always well visited! We didn´t expect to so many people to come to us. Thanks to all Fridays visitors!
We should meet with Robert Eiba at 6 o’clock pm, because we should have an example for our show on Sunday. After Eddy, Andre, Lukas and Tim dressed their costumes it began; the first time on a big stage with light effects! To be honestly...there were many mistakes at the examples and we weren’t really happy but we thought that we will do it at Sunday evening better! After the friendly backstage-assistant Sabine showed us the backstage area we walked back to the stand. After we changed our clothes the Fan-Area was closed and we went to the Opening Ceremony!

We got a tier directly behind the special-guests and had an optimal (and a little bit displaced) look to the stage. The opening film was very good, as the following acrobatic show-fight was. The following panel of Steve Sansweet was disappointing, because everything that was said or shown could be watched via internet before. Unfortunately only the “The Clone Wars” Trailer was shown, which was also shown at Celebration Europe in July 2007. So was the old The Force Unleashed Trailer... We really hoped for new videos and pictures Steve Sansweet didn’t give much information.

So we drove happy back home, the first day was over! But on two cars were tickets because of wrong parking or parking without ticket.

-So much to “free parking in the near”-