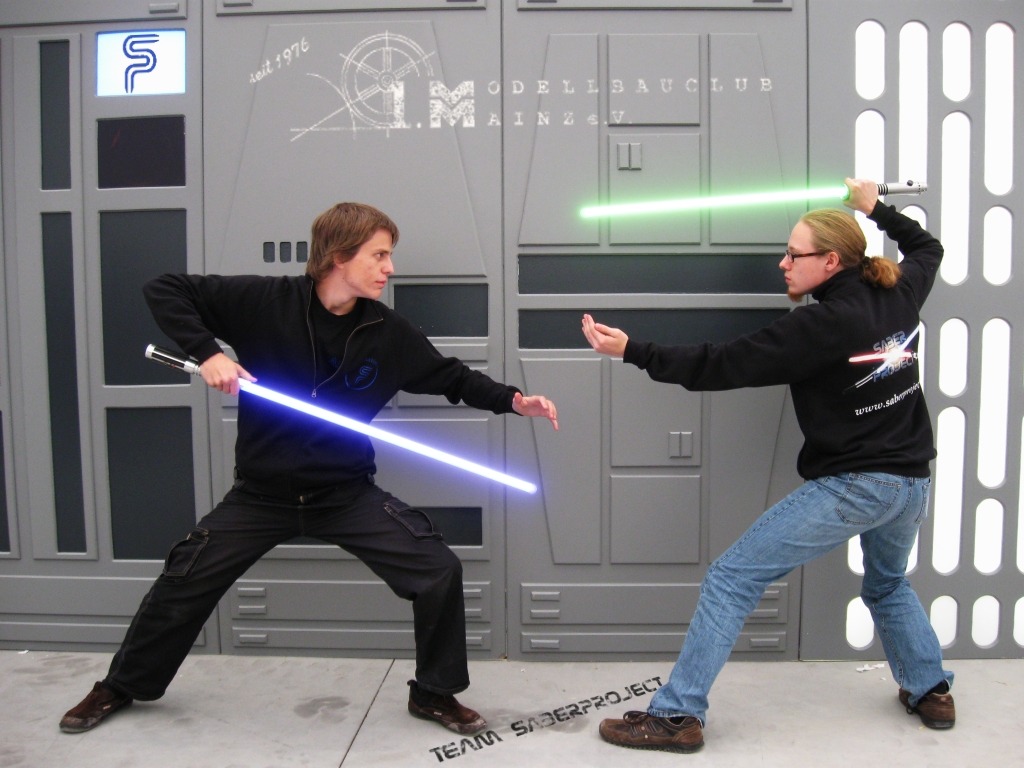 After Andre, Eddy, Jana and Tim had arrived at the Trade Fair area in Mainz due to midnight - where Markus was already waiting for them - the stand had to be built up. Our logo finally lit the hall after two hours and we were able to meet Robert Vogel, who was kind enough to offer us quarter for this weekend (thank you for that, again!), at three o'clock in the morning and went to bed as soon as possible to get a few hours' sleep after all.

In the next morning we got back to the area at 9:30 am, prepared ourselves for the rest of the day and noticed that all other exhibitors had built up their stands now as well. When the trade fair opened at 10 o'clock everything was in its right place and we awaited the first visitors.

The hall was filled with people quite quickly, but still we had not that much to do. Most of the visitors did not seem to know what exactly our stand was about and this way, deeper conversations seldom came about.

For that very reason we had enough time to look around at the trade fair for ourselves alone or in pairs. Plastic- as well as paper-, railway- and RC-model-crafting, car-, plane- and tank-models, little and greater landscapes - everything was exhibited. We took turns in walking around the hall and looking at all kinds of these models.

At noon we started spinning around with our sabers and training some of our choreographies, for we had not much to do at that very moment and we did not have a regular show this weekend. Markus finally started dueling with the Romans, who had presented themselves fully armed right beside us and everyone had a great time watching them fighting.

During the afternoon the hall emptied and at 6 o'clock pm the trade fair closed. We packed our things together and made our way back to Robert Vogel, where we spent an entertaining evening with the members of the "Lords of Korriban". Short after midnight our little round departed and we got to bed finally.

Sunday passed as Saturday before it. We answered questions and dueled with visitors from time to time and everyone had a great time in doing so. For the number of visitors on Sunday was even less than on Saturday the trade fair closed at 5 pm and we were able to begin with the dismantling of our stand at once. At 7 pm we were all packed and ready and headed back home.

In the end it has been a remarkably calm weekend, even though only five of us were able to attend this trade fair. Nevertheless we had some interesting conversations and got to know some more people. Although this weekend did not offer the kind of event in which we are normally participating it was an entertaining weekend in which we were able to get some thrilling impressions of the world of model building.