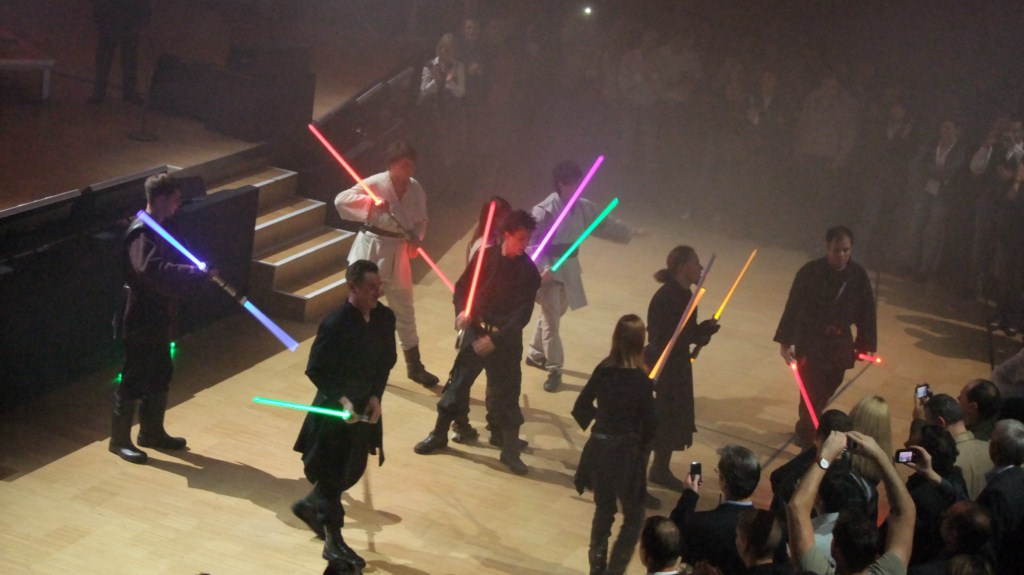 At the 29th September an important IT-event of Microsoft took place in the "Darmstadtium" in Darmstadt. The hosts decided to use science-fiction as the motto of the evening and that way we were invited to perform our lightsaber-show to entertain the guests.

The first group, consisting of Markus, Jana and Chris, already arrived in the late afternoon and they had lots of time to examine the location and the stage, for the performance would not be taking place until the later evening, when the stiff atmosphere of the IT-event had changed into a more relaxed mood.

When the rest of the group finally arrived, the others waited impatiently, because only a short time later we should be performing our first show. Hastily we brought our stuff into our changing rooms. In the meantime some of the German Garrison had arrived as well, but for us there was no more time to talk, for we had to get changed and make sure our music and sounds would be working in the show later on. When we wanted to train our performance one last time, we got to know that the stage was far too small for us and we had to unfortunately perform in front of the stage.

After all the gates opened only a short time later and the audience came into the hall, while we were guarding the entrances with our lightsabers, accompanied by the 501st legion, to get the visitors into the right mood.
As our first show approached we learned that even in front of the stage there would not be as much space as we had hoped for, because the hall's concept did not provide seats and all guests centered at the tables. So we had to fight free our required space before we could actually start the performance.

Then we went through our first stage program, which is already known from the Jedi Con 2010, with more than one blooper: one time we lost a blade and even twice a tip flew off. However the audience seemed to be content after all and was pleased with our show.

The second performance consisted of our second and new program, which had its premiere in the Legoland, was not free of mistakes as well. The new custom of Chris, that was inaugurated this evening, had a malfunction, so the choreography had to be performed with a defect saber. But again the guests overlooked these mistakes and seemed to feel well entertained.
Das neue Custom von Chris, das an diesem Abend eingeweiht wurde, fiel aus, sodass die Chroreographie mit einem defekten Schwert aufgeführt werden musste. Doch wieder sahen die Gäste gnädig über diese Panne hinweg und fühlten sich offenbar trotz allem gut unterhalten.

Meanwhile the evening had advanced and we came to understand that in the next few days we would not be getting much sleep after all, because the next event - the Fantasydays in Düsseldorf - was only two days away. Nevertheless we did not get a bad mood and relaxed with some food and some beer or even cocktails. Long after midnight we packed our things and started to make our way back to Essen and Duisburg, where we arrived in the early morning.