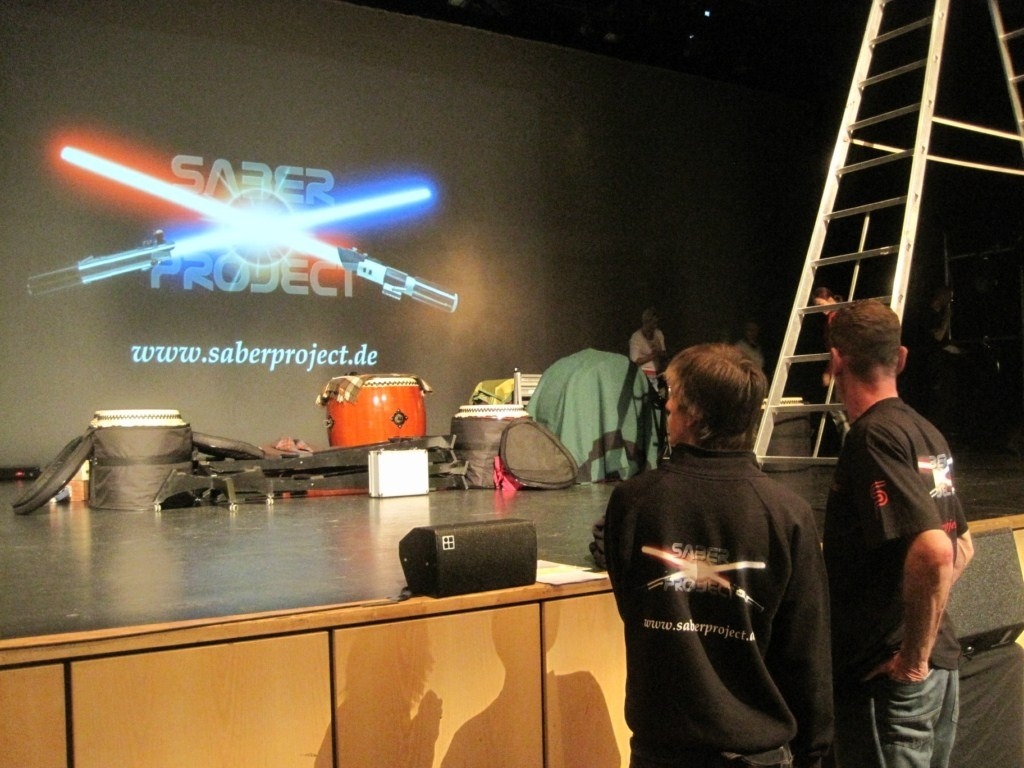 We arrived at the Novotel Neuss at 10 o'clock am more or less in time at Friday morning. After a short look around we started to unpack our things and to build up our stand for the next few days. After approximately two and a half hours the stand was all ready and our logo lit the room.

For we had not really had breakfast we went off, looking for something to eat and after quite a while we at least found an Italian Restaurant. When we got back to the hotel we started training all our choreographies for the weekend again and planned the precise line-up of our show at the Opening Ceremony.

Meanwhile Markus found a way to pass his free time by making music: he had found a piano near the main entrance and was eager to play some nice pieces while we were waiting for the Fantasydays to begin.

When the hall finally opened at 5 o'clock pm, we got back behind our stand and awaited the first visitors - which unfortunately only came in short numbers at this Friday evening. That way we did not have that much to do until the Opening Ceremony started one hour later.

At the Opening we should begin the Fantasydays Convention officially with our trailer and a littler teaser of our performance. After we had finished, Nino Kerl, the very able and eloquent host of this weekend, said a few words before the dancers of Efey began their show. With this the Opening actually already ended and we were a bit disappointed, for we had hoped for all participating groups and authors were going to present themselves and tell a few words about their work.

The rest of the evening was as relaxed as it had been before the Opening Ceremony. At 8 pm we entered the great hall again to watch the world premiere of the fantasy musical "Cysalion" by the Ringstars. Even if it lasted nearly four hours, we had a great time watching and enjoyed the breath-taking performance very much.

So we left the hall tired but happy at half past twelve and made our way back home to get at least some sleep before the next interesting and exhausting day.