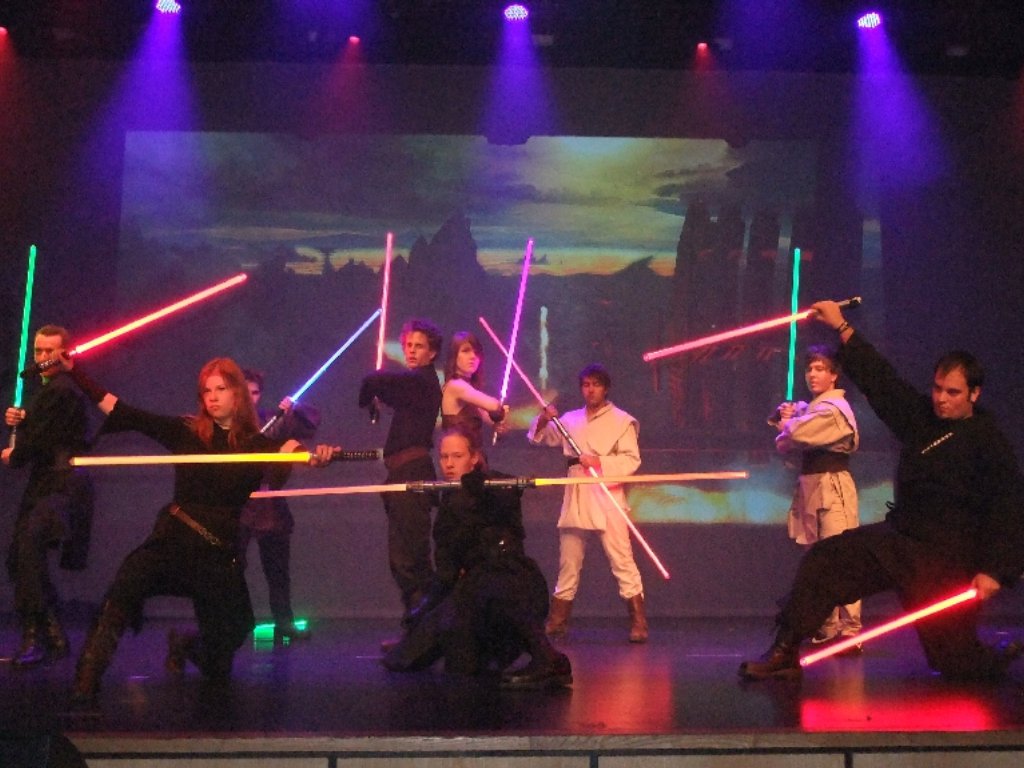 When we arrived at the Novotel on Saturday at half past nine, one half of the team already awaited us, for they had spent the night at the hotel. We cleaned the stand and checked the functionality of all sabers, because everything should be perfect, when the convention finally opened and the Fantasydays started.

One by one the visitors found their way to our stand and we soon came to understand that there would not be as much action that day as we had expected. Therefore after some time some of us went off in little groups to explore the area.
It did not take long until we got a general idea and so we wandered through the fan rooms with their exhibitors and merchants, the games room, in which one could try out several consoles, and the medieval market at the plaza before the Novotel.

At the market the strangest goods were offered: from rhyton to medieval hats and sheepskin over to jewelry and mead. The atmosphere was totally different to the buzzing fan rooms. In this place merchants, exhibitors and even visitors sat together in their long and coloured garments under canopies and in tents, praised their goods or presented some smaller battles with their larp-weapons.

When we arrived there with our lightsabers we surely got one or two doubtful glances, but we also met several interested people and in the end Jana even got involved in a spontaneous lightsaber combat.

While this part of us had fun at the medieval market and duelled, the other part held its position at the stand. There many visitors had already gathered to join our lightsaber workshop and so Markus and Jana - who finally had made her way back to the stand as well - went off to the lower levels of the Novotel to start the workshop. After having explained the basics of spining and the Attack-Defense-Combat-System, everyone could train this new abilities with a partner or just spin the saber a bit like one wanted to.
This way we had had our first and very successful workshop and were delighted to see such a great interest in lightsabers though the Fantasydays itself did not have as much visiots as expected.

At noon we tried to get rid of our hunger and searched for something to eat not as far away as the Italian restaurant the day before. We purchased some rebate sorts and bought asian noudles that were offerend at the hotel's restaurant.

In the afternoon we still had not as much to do as we would have hoped and when the time of our show drew nearer we went to the changing rooms and left the stand with Timo who accompanied us at the Fantasydays and has been a great help.

During our stage perfomance as well most of the seats remained empty, but either way we battled ourselves through the programme and were rather satisfied with our show.

Like at the evening before the Ring-Stars performed their brand new rock-theatre "The Destiny Of Cysalion" at eight o'clock pm. For we had already seen this masterpiece of art at its premiere on Friday we stayed at our own stand and celebrated the successful Saturday for ourselves with mead and music, until a member of the staff came and bade us to leave the convention area, so they could finally close.

For there was nothing for us left to do, one part of us soon departed from the Novotel and drove home to Andre, while the rest of the team stayed at the hotel and celebrated half of the night with the members of the Ring-Stars, who were happy to have done so well in their second show.