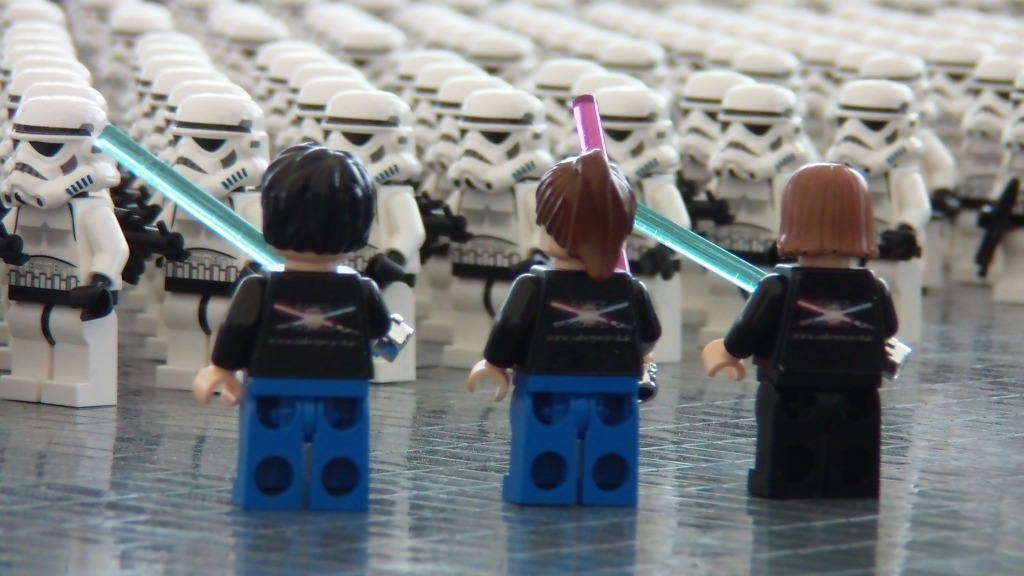 On Sunday we arrived at the Legoland at about 8:30 am and were all still a bit tired from the events that had taken place on Saturday.
After we had had a quick view over the stand and rearranged all sabers and blades, some of us took their Saberproject-Lego-minifigures and went off to the Lego Star Wars Exhibition which consisted of models with more than 680.000 Lego-bricks.
Kurzerhand fragten wir, ob wir unsere Figuren zu den Modellen stellen und Fotos machen dürften, viele Grüße an littlearmory.com 😉

After that it was high time we made our way back to the entrance, where the German Garrison already had gathered and the visitors were waiting for the park to open.
Da das Mindstorms Center allerdings erst um 10 Uhr öffnete, hatten wir noch Zeit unsere Schwerter zu holen und ein paar kleine Showeinlagen zu präsentieren.

Als unser Stand dann gegen 10 Uhr öffnete, bildete sich, wie am Samstag auch schon, eine lange Schlange die kein Ende mehr nehmen wollte.
With a short speech the park was opened at 9:30 am and we went back to our stand. But for the Mindstorms Center actually would not open before ten o'clock, we still had some time to perform some little shows and tricks within the park.
Den Stand überließen wir dann wieder für die Zeit unserer Bühnenshow der German Garrison.

At noon we performed our first program - like on Saturday - by which the audience of approximately 2000 people was as impressed as the day before.
After the show we were again busy with giving autographs and taking pictures - which actually made our way back to the Mindstorms Center a bit harder as it should have been, and so it took some time until the first of us arrived at our stand.
Die Besucherschlange wurde auch immer länger und somit waren wir bis zu unserer nächsten Auftritt gut beschäftigt.

The German Garrison was quite happy to pass the work onto us again, because the queue had grown far longer than we could have ever expected and we were very busy to keep up with our work until the next show.
But before that, at 3 o'clock, we had the chance to walk along in the parade of the 501st Legion and so we walked - armed and in our costumes - together with Stormtroopers, Generals, Officers and Rebels in a long colonna through the whole park, joined by the Imperial March.

At 5 o'clock we had our second performance with the new program and the audience was again so great that we had to put on a second show straight away. Some of us strolled through the park afterwards, while the rest hurried back to the stand, where again many visitors were waiting for us.

At about 7:30 pm we closed the Mindstorms Center and our stand. After a short break we grasped our sabers and went to the entrance area of the Legoland, spinning our sabers and performing some of our choreographies. After a moment a great circle of audience had formed around us and those who were not fighting were urged to give autographs and answer questions. When the park finally closed at 8:30 pm and the last visitors had left the park, we went back to our stand started dismantling it while we looked back at this hard but successful and great weekend.

At this point we would like to say a BIG THANK YOU to the Legoland-Team and the whole German Garrision for this weekend, with many great moments to remember!