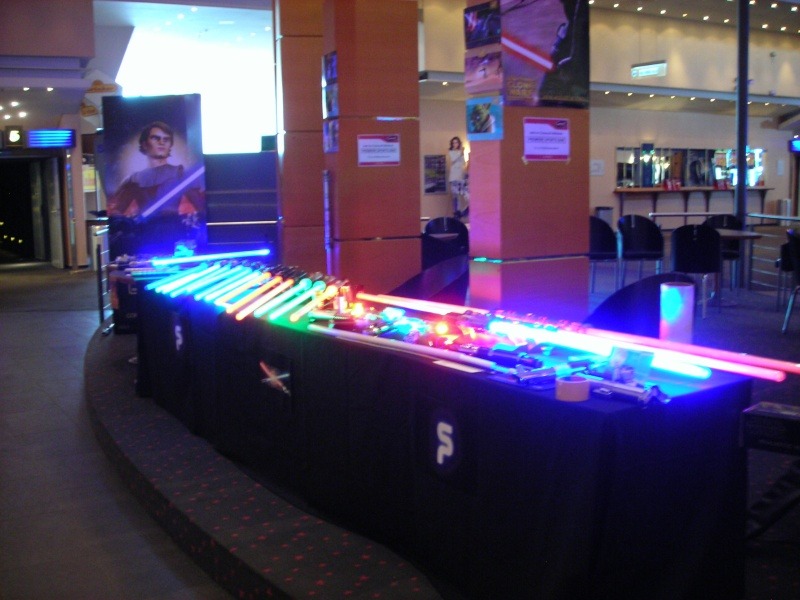 Actually, for us Thursday began Wednesday evening. After Jana, known as “DarshaJela”, had challenged Tim since Tuesday, Desirée (Shana), Jan (Karsil) and Markus (Bertuzzi) arrived next day.
Together we drove to the Rhein-Ruhr-Center to watch the preview of “The Clone Wars”. There we met Andre, who had already brought the desks we would need the next days in the cinema. Together we enjoyed the movie.
After this we had a short briefing and arranged to meet us at 12 o’clock to have enough time for building up our stand and practicing. When we had arrived at home, Alex annunciated his arrival for half an hour and he really arrived an hour later.

Thursday morning Eddy joined us and we headed for the cinema where Andre already waited for us. There we had a short briefing and in its corse every teammember got a new teamshirt from Andre. Thanks again! After we built up our stand, we investigated the stage and practiced our choreographies. It worked well so we were optimistic to manage our first perfomance at 15:30 very well. But before the cinema opened its doors for the visitors at 14:30. Our first guest had been costumed members of the fan group “Order of the Force”, who stayed with us for a while before they hurled themselves into the Clone Wars. Just a few minutes later, Lukas (Shelby) arrived, who came from shool awake and well-tempered. As expected the congestion had not been so intense so we decided not to perform at 15:30. But at 17:45 it was time for our first presentation. Due to the fact that Markus didn’t have a costume we agreed to perform all presentation of this day in team clothes.

Excitedly we entered the cinema hall. When the commercials had ended, “Rolling Fighing” sounded and Tim and Eddy acceded the stage. They did their choreography souvereingly and finally Tim stroke down Eddy. The following fight was the first debut performace at this day, “Anatim vs. Scoulcher”, underlayed by “The Sith Spacecraft and The Droid Battle”, but in an other version than it had been presented at the Jedi Convention. Andre attacked Tim determinedly with his two sabers and Tim had trouble to parry his strikes. Unfortunately they made a few mistakes so that this debut did not work as we had wished before. But both of them bit through it and finally Tim prevalled over Andre. But there was no sit-down for Tim. Just seconds after Andre had fallen, Markus activated his double-lightsaber in harmony to the sound of the “Duel of the Fates.” But this time Tim didn’t defend himself alone. Lukas acceded the stage, too. The combatants cercuited each other and Markus attacked first. An intensive fight began. Not faultless but succesfully anyway they fought and lastly Markus speared Lukas with his blade. But Tim hurried to help his friend and in the end he triumphed.

All in all we were satisfied with our first perfomance but there still was space to improve. We all had the opinion, that clear start- and endpoint would make sense. So we decided that Jan should do short announcements before and after our following presentations. At 20:30 we had our next performance. Is was quite similar to the first one. Eddy and Tim fought souvereignly but “Anatim vs. Scoulcher” didn’t present their choreography convincingly. The last battle had been nearly faultless and all in all, it was good.

Nachdem wir mit unserer Vorführung fertig waren, hatten wir wieder freie Zeit, in welche wir den Pizzaservice kommen ließen, um nach ca. 12 Stunden wieder etwas zu essen.
After this presentation we had free time we used to call the pizza-service to eat something after 12 hours of hunger. When we had finished our meal, the movie ended. We received visitors and answered questions. When the cinema exhausted we brought our exhibits into our room and around 23:30 we left the cinema and drove back home.