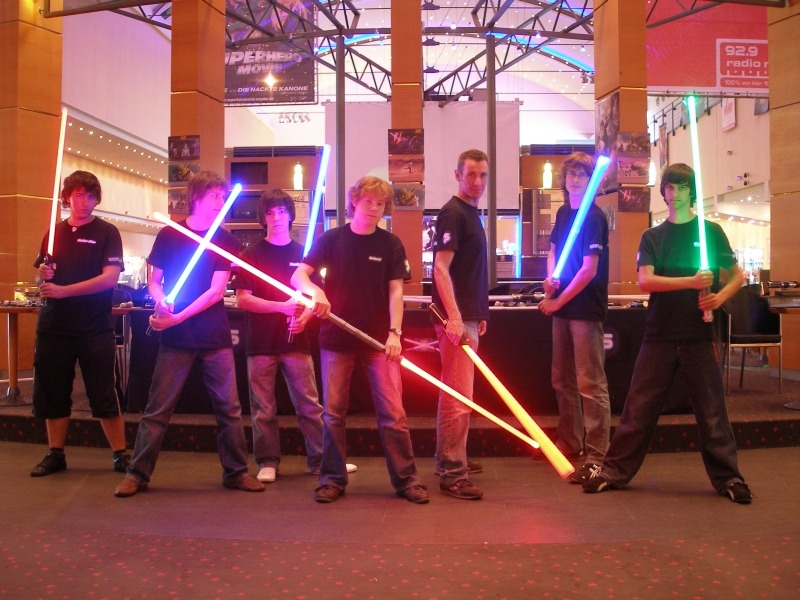 At 9:00 the alarm clock rang. It was the second day of “Saberproject goes CinemaxX”. After a breakfast we kept being chilled and drove at half past 11 to Rhein-Ruhr-Zentrum. When we arrived, Andre was already waiting for us. We built up our stand and tested the fights for our show, until the cinema opened for visitors at 2:30 pm. So our stand was attacked again. Sabers were tested, described, it was discussed and from time to time the team showed what they got. Then the first show of this day came nearer and we changed our clothes. Jan went to his place at the techniques; everything was ready and our show began. We changed it a bit compared to Thursday. Since the choreography of Andre and Tim didn’t work good twice, we skipped it. Instead of that we could convince Jana and Desirèe to show their choreography, which they had made on their own.

This worked without any mistakes and after Eddy had defeated the surviving Jana, he and Tim continued the programme. After Eddies death Lukas and Markus came to the Stage to fight their choreography. But other as on Thursday, this was not the final fight. A strained atmosphere was felt, before the Dark Lord of the Sith, Darth Vader, entered the stage and faced Tim. Without any problems the Sith Lord defeated the Jedi and clenched his fist. With applause we left the stage.

When we were in our normal shirts again, we took some team photos from different angles. Then again fights were fought and choreos repeated, before the visitors for the 5:15 pm performance came and our stand was full again. As we expected, this day there were more people in the cinema than on Thursday. But it was time for the next show, which should be one of the worst…

In this performance much didn’t work… we had a good start, Jana and Desirèe fought their choreography competently. But Tim and Eddy had to wait, because there was some trouble with the music controls and the track didn’t switch. After haunting, nearly endless seconds it worked and the two opponents began with their duel. The following fight with Markus, Tim and Lukas worked well, but when Darth Alex Vader came to the stage, he lost his blade what he and Tim were able to safe through good improvisation. We were happy that we finished it, thoug.
After a short relaxation pause we made some more teamphotos in the CinemaxX, after that we ordered pizzas again, while we were waiting we fought once again. Then we came to the 8:15 pm show, where everything worked well, compared to the previous one. Then we chilled until the last performance of the day at 10:30 pm, that we managed to finish without mistakes. We held a small briefing about the next day and after the visitors left the film and had examined our sabers we cleared our stand and headet for tim, where we watched the videos we had made on that day.