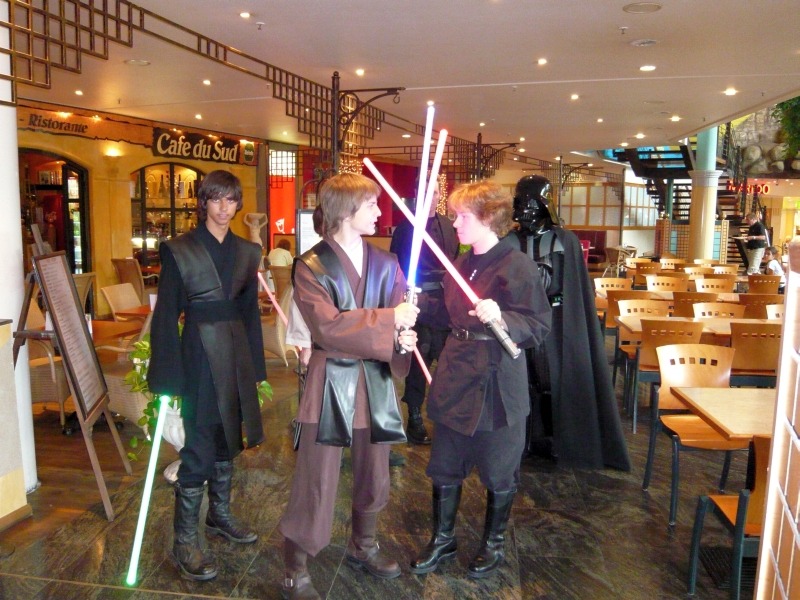 We began Saturday with heaving breakfast in shifts, before we got into Tim’s and Alex’ cars to drive to the cinema.
Andre was already waiting for us and together we built up the stand. When this was done we revised our choreographies and fought just freestyle.

At about 14:30 we had put on our costumes and walked through Rhein-Ruhr-Centre. At Schnitzelhuber, where we were going to eat later, we took some photos.
After that we returned to the cinema, where we stayed in our costumes, since the next show was at 15:30. Without bigger mistakes we mastered this and came back to our stand.

After having changed the clothes after the 17:15 performance only Alex and Lukas still were in costumes. Together they went as Vader with his Secret Apprentice and the others to Schnitzelhuber, where Alex got into the cameras again. Then the two of them returned to the cinema to change the clothes for eating.

Das größte Schnitzel der Welt war nicht nur quantitative, sondern auch qualitative Superlative!
The biggest schnitzel of the world was not only quantitatively but also qualitatively superlative! It tasted great, in the mater of sauce there is something for every taste, one can choose between different flavours! The staff is open to special requests in the mater of apportioning the schnitzels (we shared two schnitzels with seven man, everyone got a plate, cutlery and cut a piece from the schnitzel in the middle).

After our meal we returned to our stand happily and invigorated to wait for the next visitors. Again sabers were lent, tested, described, showed, questions were answered and jokes were made. We prepared for the 20:15 presentation and revised the hits in our mind. While Jan got to his place at the Projector, we went to our positions inside the cinema. When the music began, Tim faced Eddy, as twice before. After Eddies death Tim and Lukas defeated Markus again. The fight went on without bigger mistakes and Lukas sabers’ LED lasted the whole fight, in contrast to the 17:15 show. When Tim was stroke down by Darth Vader again, we exited the hall with lots of applause.

After the film had finished the expected run from the cinemas came again. Visitors asked questions, tested and took part at the lottery. But there wasn’t much time for that. We had to get into costumes one last time, because our performance was set to 22:45. Tim defeated Eddy with the usual aplomb. With big self-confidence Tim, Lukas and Markus faced each other. But after a few hits that happened, was nobody hoped, but everybody had feared. After an ugly cracking one blade of Markus’ doublesaber broke. But the three had prepared an emergency plan one week before, when the choreography was studied. After small problems in coordination and the transformation into Anakin Skywalker, Obi-Wan Kenobi and Count Dooku Tim and Lukas attacked Markus again strong-willed. But Lukas was too impulsive and one well placed hit by Markus stroke him down. With heavy hits Tim attacked Markus, who was not able to stand those and finally fell victim to his blade. Though this glitch Tim and Alex kept their focus and after Vader triumphed over Tim again, we left the cinema exhaustedly.

After changing the clothes again we cleared the stand and headed home.