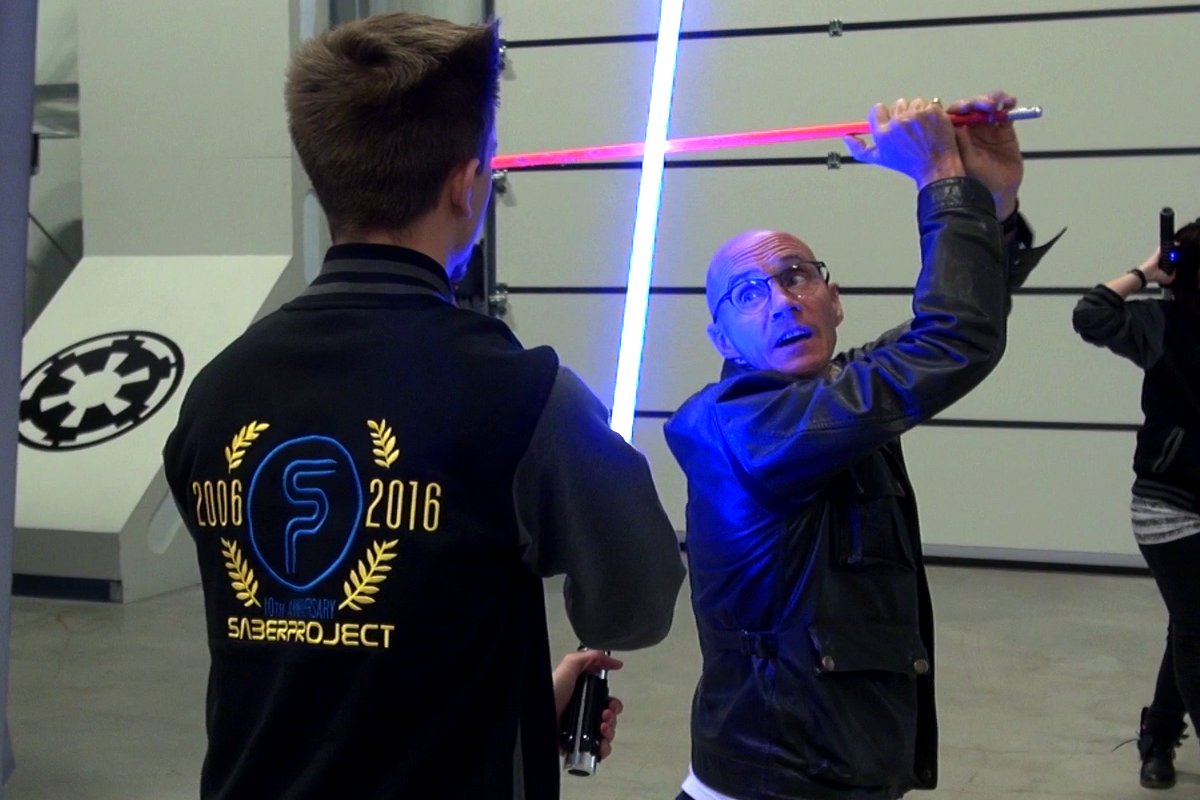 Ten years ago, we founded Saberproject. What began as a simple website maintained by four Star Wars fans has turned into something big since 2006. Nowadays, Team Saberproject tours all over Germany and Europe as a group, delighting big and small Star Wars fans with an extensive lightsaber exhibition, workshops and a half-hour stage show.

During the show, lightsabers are buzzing through the air while unique stories are being told. The light side of the Force fights against evil which is being personified by Kylo Ren and his Knights of Ren in our current stage show. Luke Skywalker who appears as a hologram voiced by his original German movie voice actor Hans-Georg Panczak during the show sends his last Jedi to seek out an old ally on Jakku.

We did not have high hopes when we tried to reach out to him while planning our anniversary celebration. But his reply came quickly and, incredibly, he said that he would love to visit us and is amazed by our activities. Luckily, his job as a stunt coordinator which leads him to places all over the world did not interfere, and so it came that we did not only celebrate our first decade with friends, partners and supporters, but also with our big idol. That was both surreal and fantastic at the same time.

Equipped with a huge supply of black tea (Nick is typically British in that regard), this was one of our most interesting weekends. Not only did we get a private “master class” about handling a lightsaber, but we also heard great first-hand anecdotes and stories. Nick is such an open and friendly human being that we almost did not want to let him go. Therefore we used the time for an extensive interview with him. After all he has not only worked on Star Wars, but also on Superman, Indiana Jones, Alien, Wanted, and a lot more.

How do you become a stunt coordinator? What is Nick doing now? What are his life experiences? How did the lightsaber choreographies of the prequels come about? What is his favourite lightsaber and why has he turned down job offers for Lord of the Rings and Harry Potter? You’ll find the answers to all these questions and many more fascinating stories in our interview about the life, carreer, and lightsabers of Nick Gillard, who is our great idol and who we can now call our friend.

Star Wars connects people and Star Wars writes the best stories! The Force is with the fans, always