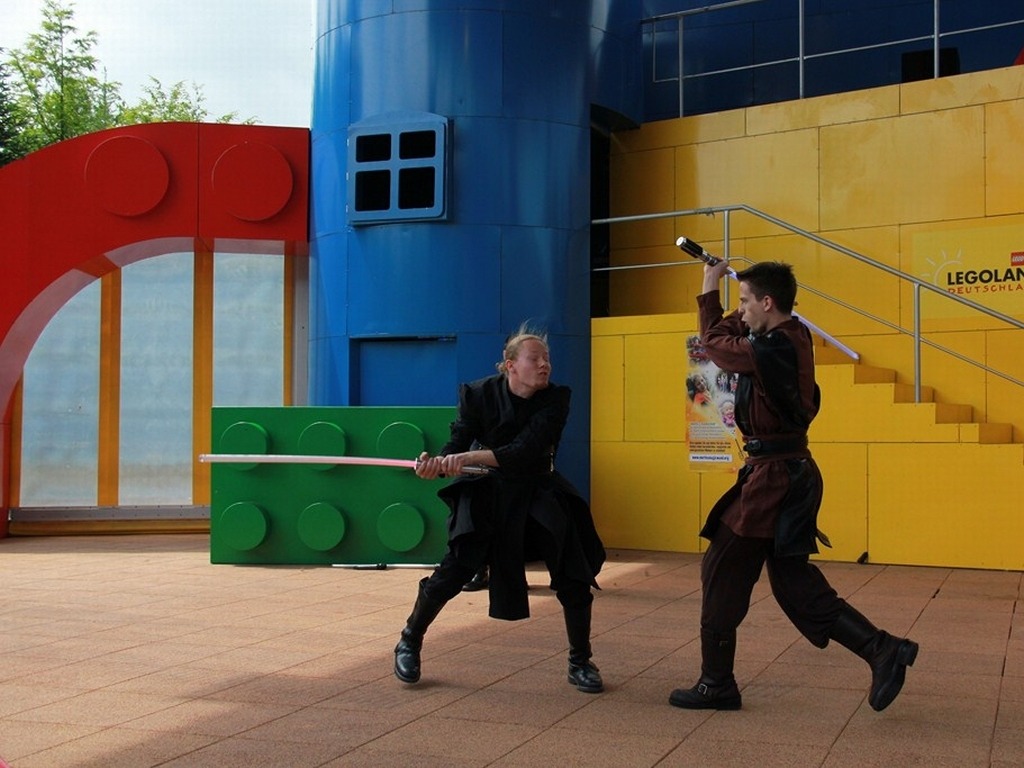 After at night, that had been far too short, we were back at the Legoland at about 8.30 a.m. We used the time until the park would open to take new pictures for the team section and the new booth, but as well for a long walk through the miniature land.

Especially the models of several well-known scenes from the Star Wars movies caught our eyes and that way 9.30 came sooner than we thought and visitors swarmed into the park. Although the weather was much better that the day before, the great rush we had expected stayed away. However under the more than 200 members of the German Garrison there were many well-known faces and we bridged the smooth start with some private talk.

So it came to pass that we soon had the time to get to know Michael Kingma, this year's guest star at the Legoland. Even though his face would not attract as much attention - for he played the Wookiee Tarfful in Star Wars Episode III and therefore wore a mask - his tall figure could not be overseen. Even when Tim sat on Chris' shoulders, their fusion was only a little taller than the professional basketball player. When the park became fuller and fuller, we did not have the time for such foolishness anymore and we informed interested visitors about the different kinds of sabers at our booth. Through our excellent occupation this year, the stress kept within limits, so we went to our first show at 1 p.m. quite relaxed.

As we had changed into our costumes backstage to care for the right Star Wars atmosphere, we listened to the last songs of the dancing group Laudonia, who had their performance right before ours. When the gate opened, we were happy to see full tribunes. Motivated we fought our way through the program and got a lot of applause. Backstage we met some true visitors of our chat, who would be at the Legoland for the next two days and had seen our show.

After some small talk the first group went for lunch, while the others said goodbye for the moment and got back to the booth to help our assistants. This way the day passed really quickly and the second and last show drew nearer. For the onrush was very great the park decided offering a third show this day and we agreed happily.

Tired, but yet motivated, we went through our performance one last time that day, at which some in the audience might have seen our exhaustion. We spent the last hours at our booth or in small groups within the park, where we tried out some of the new attractions or went shopping in the Lego-Shop.

When the park closed, we hurried to get our things and leave as well, for we were invited at some friends' place that stayed in the Legoland village for the weekend. After a rich meal, of which our hosts had taken care of (at this point again a huge thank you!!), we enjoyed the warm weather and the sun, took a walk in the village and savored the evening.