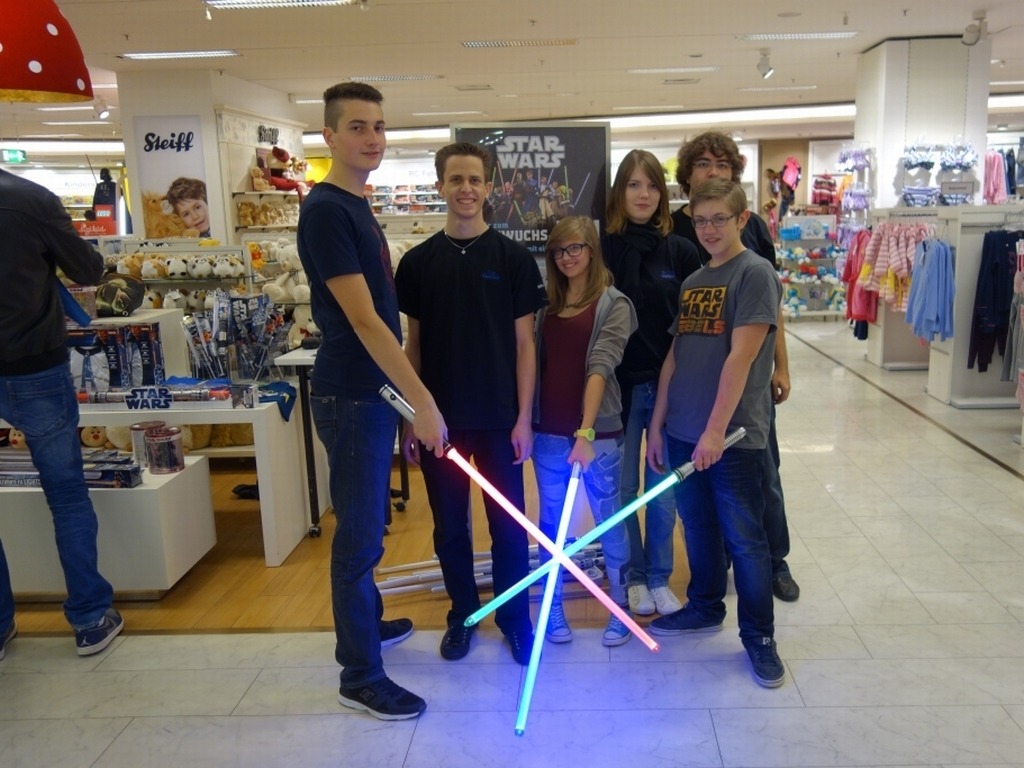 A successful year 2013 draws to an end and the training of our young Jedi aproaches a well-deserved winter break.
For the third time since our Tour start in 2011, we traveled with our Hasbro workshop tour to the major cities of Germany to instruct small and grown up Jedi in handling the lightsaber.

Unlike in previous years, we were able to train enthusiastic young Jedi, however, not only at Galeria Kaufhof but for the first time in selected Karstadt stores. Already experienced fighters could bring their own lightsabers.
Bereits erfahrene Kämpfer konnten, wie in den Jahren zuvor, ihre eigenen Lichtschwerter mitbringen.
For those who were still unsure about the purchase of a lightsaber we were able to provide a wide selection of Ultimate FX Lightsabers from Hasbro which could be extensively tested during the workshops.
To all undecided we gave expert advice at any time.

At our first workshop tour in spring (February / March 2013) as well as our tour in fall we illuminated the department stores in the bright colors of our blue, green and red lightsabers.
During our workshop times (from 11 am to 6 pm) the lightsabers of the participants are crossed for 20 minutes under our supervision and precise step-by-step guidance.

Here we provided the first foundations for a spectacular but also risk-free lightsaber combat.

Here everyone was once allowed to defend an imminent attack against his opponent but with targeted attacks to push him back. Those who had mastered the workshop successful were awarded with a certificate which is reserved exclusively for our young Jedi.

We were delighted at the huge demand and motivated participation to our by Hasbro enabled workshops.
We would like to thank Hasbro for organizing the Germany tour in 2013, the department stores for their keen interest and commitment, and all our energetic helpers and assistants for their extensive support.

Due to the particularly high demand an additional lightsaber workshop was held on November 30th in 2013 at Galeria Kaufhof in Mannheim. Together with you, we were able to conclude our workshop tour in 2013 successfully.
We hope you had as much fun as we had and we'll see you at our next workshop again.