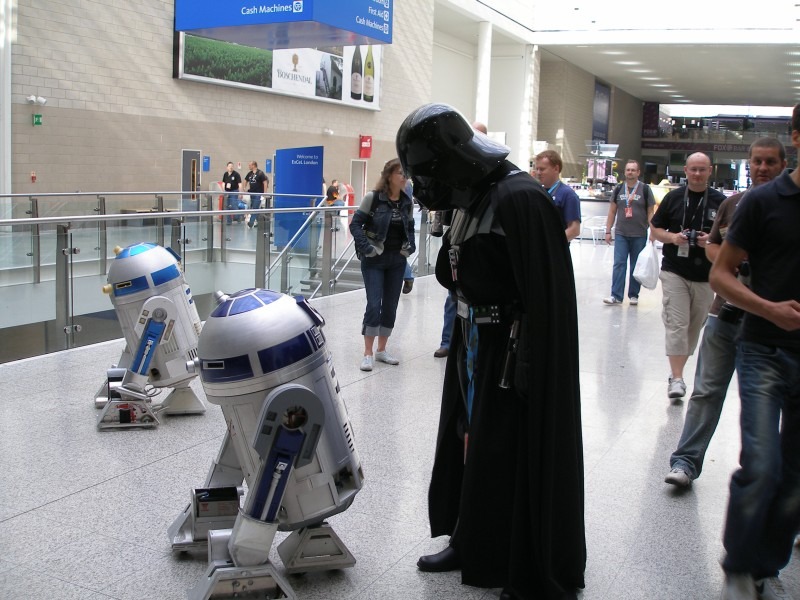 Lost in London - Freitag, 13.07.07 - Tube/Celebration Europe/Canning Town/Opening Ceremony
At 6:30 in the morning our alarm clock rang ... After breakfast buffet we returned to our tiny room and started to change into costume.
After Tim was in his costume Alex needed some help to become the dark lord of the Sith.

Already when we were at the streets in front of our hotel we recognised the views of so, there is not a Darth Vader running through London’s streets every day.
At the substation the first people started to take photos, but without talking to us. Inside the tube many people asked us for a photo. We could differ into two groups of people: those, who asked us ("can we take a picture of you?") and those, who took one behind our backs.

But things were getting better, while we ran through the station in Westminster, to change, a shootout imitated Vaders breathing. When we got off the train wrong, and the door was already closed the other passengers opened the door again (somebody to Alex: "come with me!").
After that the porter said something of "Skywalker and Vader in the back part of the train" which we unfortunately didn't understand, cause the people around us were busy to talk to us, or better to Tim, since Alex didn't notice under his helmet.

Arrived at the area of ExCel Exhibition Centre and waiting in a loooong queue we finally were at CELEBRATION EUROPE!

In the first room a huge deathstar hung from the ceiling, followed by Jabba the Hutt on his throne with slave Leia.
So we walked some time through the stands, action figures, Lego, posters, t-shirt, etc... Everything you can wish as a fan!

But there still was our money problem... Thank Alex' mum we could get some money from the "western union" bank.
But where is the next western union bank?
So we phoned to the hotline and learned that the next one is in barking road in Canning Town.
Uncountable photos later we got to DLR-Station and were off to Canning Town. Thank our enormous sense for orientation we found the bank within one hour.. With more money and countless chats/photos with pedestrian (some girls to Alex: "You're scary!") later we got back to excel.
The rest of our time we spend at the photos of Vader Project and visited the Clone Wars panel, where we missed a part...

At 19:30 the opening ceremony should begin, so we went to the entrance and watched lightning bear (Scout/Stormtrooper in episodes 4-6) smoking. After a while we were wondering why nothing happened... Until we noticed that it took place 100 metres behind us and we just didn't see.
We got a place in the first rows and were able to see Steve Sansweet, Mark Hamill and Ian McDiarmid.
"Happy Friday 13th!"
-

After that we watched Episode IV to one third, before we were off to the long way home to our hotel.