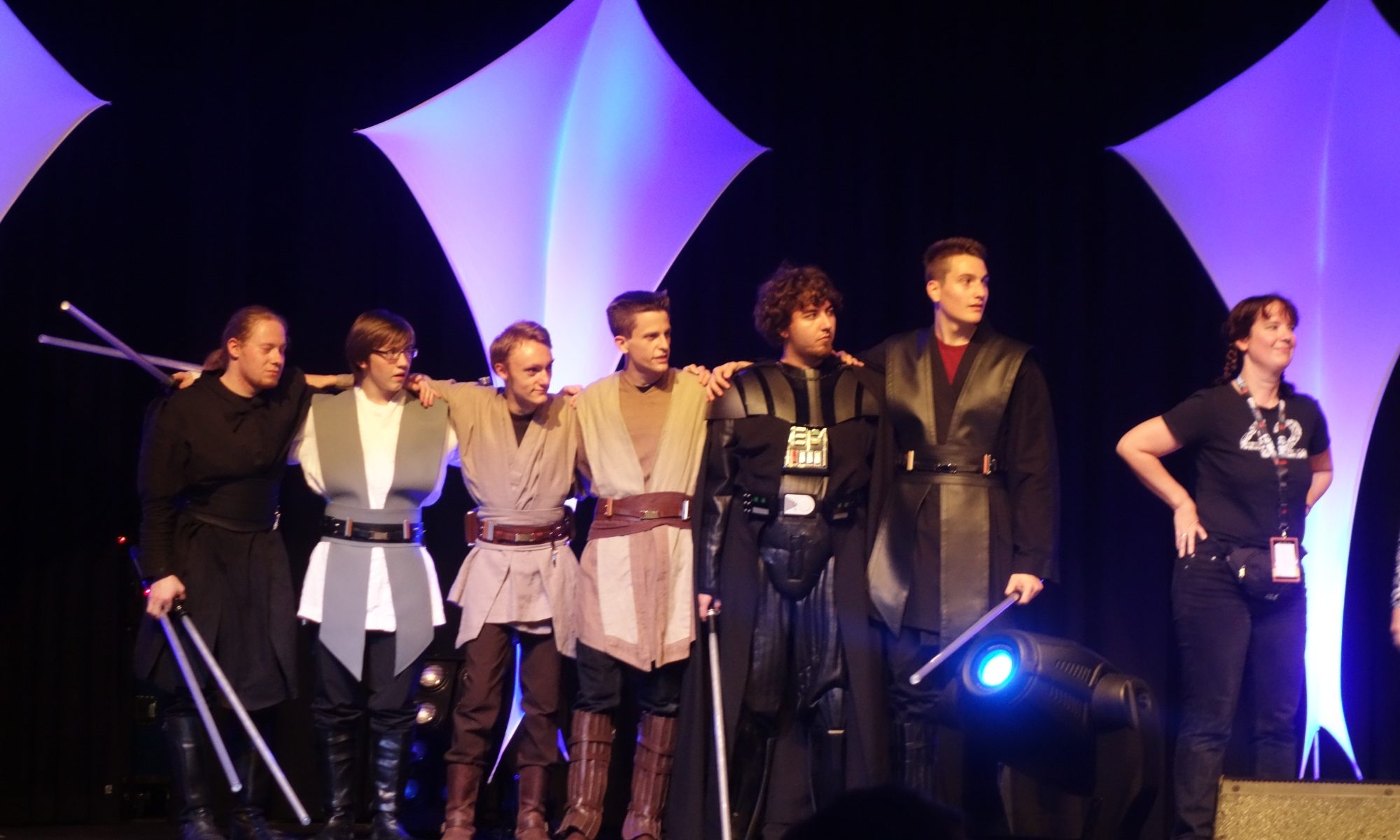 Wednesday Evening we already entered the Maritim Hotel with great anticipation, because the main hall evoke lots of memories: on this stage we were allowed to perform our lightsaber performance for the first time. This was six years ago. After we had unloaded our booth we arrived the next day for building up. Although we were quite fast we were the last ones who left the fanroom.

The first alarm clock rang at 5:45 am, because time passed by quickly until all of us had breakfast and were ready to go. The parking situation was complicated as the years before. Because of our experience from the last two Jedi-Cons we found cheap parkings.

Friday was the most visited day of the three con days. We had no time to acclimatize to standing behind our booth because in the afternoon we had to go on stage to perform our show in front of an audience which just consisted of Star Wars Fans was a unique highlight. We were very satisfied with the performance and had a break.

But Tim and Markus had to go on. They held their panel, “Team Saberproject and the way to your own lightsaber”. Tim told the audience about the history of the team and the work within and Markus gave a lecture on the different components and assembling of the lightsaber. This panel quickened great interests. Because of this there was a very great afflux at our booth.

When the fanrooms had been closed for visitors, we stood on stage for the Opening Ceremony. First a movie was shown, where Tim, Fabi and Hendrik played as Angelo Litricio, René Lezard and Justin Magine – pirats, led by Jack Sparrow, who come across with lightsabers and a holocron on their search for a treasure. Using the holocron they were able to travel through the dimensions. So they landed in a Star Trek Transporter room, a Western Saloon, a Fast Food Restaurant and at last on the Jedi-Con stage, where the movie merged to live action.

A conflict between pirates and Sith broke out. The Sith prevailed. Finally Vader wanted to strike out for the final hit against Captain Sparrow, but was interrupted by Robert Eiba, the chairman of the Official Star Wars Fanclub and organizer of the Jedi-Con. He explained that Star Wars and Pirates of the Carribean belong together and should not fight against each other due to the same producer Disney.
After this ceremonial kickoff we fell in out beds because we had to be 15 minutes earlier at the hotel the next day.

On Saturday the alarm clock rang on 5:30 am and after the common breakfast the second day of Jedi-Con started more or less relaxed. Only Tim was busy on stage hosting several panels. We could use the day for informing people about the different types of lightsabers or use the time to amble around the Con or go to a Panel.

The first highlight was the Panel of Anthony Daniels, moderated by Tim. During the panel Anthony Daniels did not just reorganize the hall by assigning other seats for the visitors, but also taught Tim in way of acting like C-3PO. But also the dubbing actors and the costume contest were highlights on this day.

In the evening the Jedi Challenge took place, where the 13th member of the Jedi-Council should be determined. Both candidates had to solve 4 tests. After a short demonstration we tested both in their lightsaber skills in the last test.

After the ending of the challenge many visitors met at the hotelbar to let fade away the evening with conversations and drinks.

Of course the following night was too short and we felt the typical lack of sleep, which is ineluctable on such kinds of events. Tim‘s lack of sleep was quite obvious who had to moderate a panel the next morning. The last day offered the possibility to meet old friends or to say goodbye to new friends.

Of course we were also part of the Closing Ceremony in which we stood on stage to perform our show a last time. Especially for Hendrik this show was exciting because his family came to see him on stage. But the highlight for us all was our show intro and outro spoken live by Hans-Georg Panczak, the German voice of Luke Skywalker.

After a good show we left the stage and took our seats in the audience to enjoy the rest of the Closing Ceremony. So we cheered as the „Star Wars Cantina Song“ was performed by Mark Dermul on stage. When the closing remarks and some kind words of Robert Eiba and Michael Eberhard (OSWFC) and a little movie, which resumed the past three days, the event was officially finished

Finally we had to disassemble our booth and load it into our transporter. After this we left the fanroom, as usual, as the last one. Now the event had finished for us too.

We look back on a series of events in the recent weeks. The Jedi-Con was a worthy conclusion. We hope to have lots of great experiences with all participants in the future again.